Restoration in the Protestant Cemetery in Jerusalem

A little more than a year ago we wrote a few posts about the Protestant Cemetery in Jerusalem where several well know persons are buried. These include Horatio Spafford, the author of “It is Well With My Soul,” and several famous archaeologists. See here. Use the search box to locate more articles about the cemetery.

We also reported on the vandalism of the cemetery here. In most instances this consisted of crosses being broken from their base.

The Jerusalem University College, on whose campus the cemetery is situated, reports now that the Society for the Preservation and Restoration of Israel Heritage Sites recently restored the grave markers. See their Facebook page with more photos here. 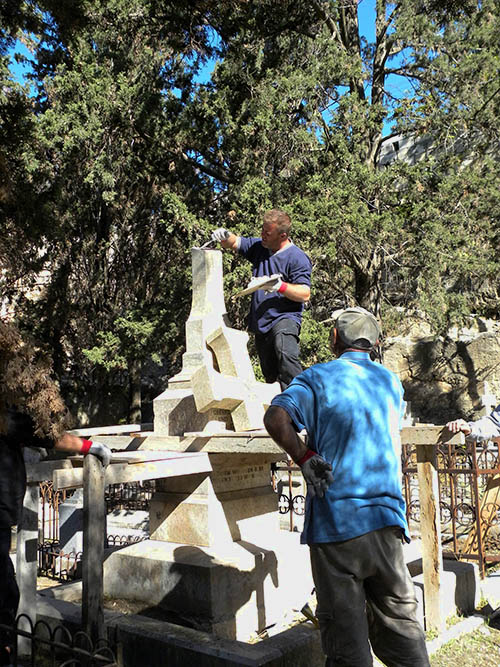 “Rejoice and be glad” you are not in Jerusalem

In addition to the fact that Jerusalem is now one of the most difficult cities to navigate (my opinion based on 47 years of travel experience), the Passover is approaching. Jewish families must make many special preparations.

The President will be staying at the famous King David Hotel. If you planned to visit the Herodian Family Tomb behind the hotel, just forget it for a few days.

Over 5,000 police will be directly involved in providing security for Obama and his entourage, while hundreds of others will be helping out in indirect ways. For example, over 100 officers will be added to the police help line specifically to deal with issues called in by citizens relating to the Obama visit. Police will keep citizens updated on all aspects of the visit by phone and through social media.

Over 1,000 police alone will be deployed around the King David Hotel, where Obama will be staying, and will follow Obama around as he pays visits to people and institutions during his three day visit here.

Here is a photo of the King David Hotel from across the western part of the Hinnom Valley. It was taken either from the Protestant Cemetery, the Campus of Jerusalem University College, or a few meters to the north of that. 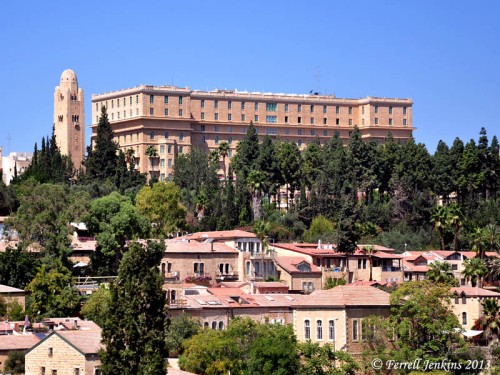 King David Hotel from the slope of Mount Zion. Photo by Ferrell Jenkins.

Take a look at some of the traffic problems.

Already on Sunday, long before Obama arrives, traffic in Jerusalem was extremely choked, as police began setting up barricades, and many Jerusalemites took to the road to finish their Passover shopping while the roads are still open.

Among the roads to be closed sporadically during Obama’s visit will be Road 1, between Ben Gurion Airport and the entrance to Jerusalem, as well as main Jerusalem thoroughfares such as Herzl Boulevard and Derech Hevron [Hebron Road]. Police said they will make every effort to ensure that roads are closed only of absolutely necessary.

Several years ago I was in Jerusalem when President Clinton came to visit. Our hotel was far from the Old City, but policemen were stationed about a block apart. Nations normally enjoy these high level visits, but I am not sure this current one means very much, but it keeps Air Force One running. (O.K., you have a right to your opinion.)