Watch out for camels

This post is not intended as a summary of information about camels in the Bible. It is just calling attention to the terrain and kind of signs one sees in Israel’s Negev (Negeb). The NKJV uses the directional term South.

Abraham and Isaac lived in the Negev. When Abraham was old he sent his most trusted servant back to Padan Aram, where Abraham had lived before coming to Canaan, to get a wife for Isaac (Genesis 24). After arrangements were made for Rebekah to return with the servant to Canaan, the Biblical account reads as follows,

Then Rebekah and her young women arose and rode on the camels and followed the man. Thus the servant took Rebekah and went his way. Now Isaac had returned from Beer-lahai-roi and was dwelling in the Negeb. And Isaac went out to meditate in the field toward evening. And he lifted up his eyes and saw, and behold, there were camels coming. And Rebekah lifted up her eyes, and when she saw Isaac, she dismounted from the camel and said to the servant, “Who is that man, walking in the field to meet us?” The servant said, “It is my master.” So she took her veil and covered herself. And the servant told Isaac all the things that he had done. Then Isaac brought her into the tent of Sarah his mother and took Rebekah, and she became his wife, and he loved her. So Isaac was comforted after his mother’s death. (Genesis 24:61-67 ESV) 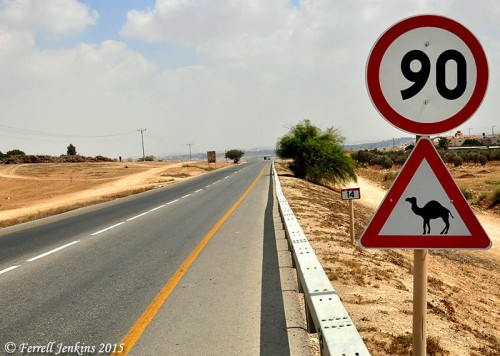 No camels during the Patriarchal Age?

That’s what they are saying. It is a popular theme of those who want to put Bible believers in their place. Camels are mentioned repeatedly in Genesis 12-37, a section of Scripture set during the Middle Bronze Age (about 2100–1550 B.C.). Many of the well-known Bible characters of the Patriarchal Age are mentioned as riding camels.

A few days ago I was beginning to locate my sources to respond to the recent article in the New York Times, and in Time. While I was working on Visualizing Isaiah, Todd Bolen came out with two great articles on the subject. I include these links for the two people who read my blog but do not read the Bible Places Blog.

First, you should read the post about the Domestication of the Camel.

Both are these posts are well documented with scholarly links you can track down to your own satisfaction. Don’t be unprepared the next time this subject comes up.

Camels at Abel-meholah, possible home of the prophet Elisha. Photo by Ferrell Jenkins.

Meet the Camel Family at Abel-meholah

This morning we drove south from Tiberias through the Jordan Valley. At Abel-meholah, possibly the home of Elisha the prophet (1 Kings 19:16), we saw about a dozen or more camels on the hillside. I was impressed with this group of seven that stayed together apart from the others.

Camels at Abel-meholah in the Jordan Valley. Photo by Ferrell Jenkins.

Camels are first mentioned in the Bible in the time of Abraham (Genesis 12:16).

Tonight we are at Mitzpe Ramon, a little town that overlooks the Maktesh Ramon. This Maktesh, the largest on the face of the earth, is located about 50 miles south of Beersheba in the Negev wilderness of Israel.