“The stork in the heavens knows her time”

I have not seen a stork nest in a fir tree, but I have often seen them on the top of electric poles, chimneys, and ruined columns. 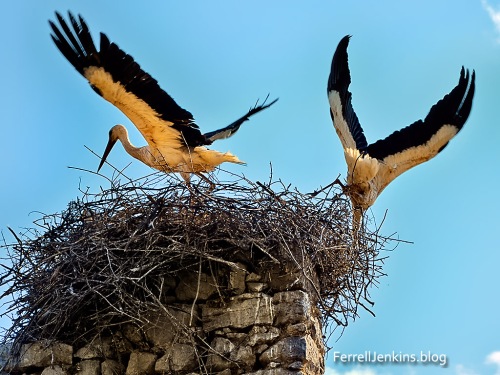 These storks are building a nest on the top of an old brick column at Kovanlik, Turkey. This photo was made yards away from the beginning of the Via Sebaste or Imperial Road that leads northeast across the mountains from the Pamphylian coastal plain to the Anatolian plateau. The approximate location is 37 10.4234N, 30 35.875E. Photo by Ferrell Jenkins

The prophet Jeremiah uses the faithfulness of the stork as it moves from one continent to another and then returns as an illustration of the faithfulness not seen in the people of the LORD.

Even the stork in the heavens knows her times, and the turtledove, swallow, and crane keep the time of their coming, but my people know not the rules of the LORD. (Jeremiah 8:7 ESV)

I have seen this played out repeatedly in my travels in Israel and Turkey. The storks fly from Europe and other northern climes to Africa in the fall of the year. The Great Rift provides the way for them to navigate through Syria and Israel/Jordan. 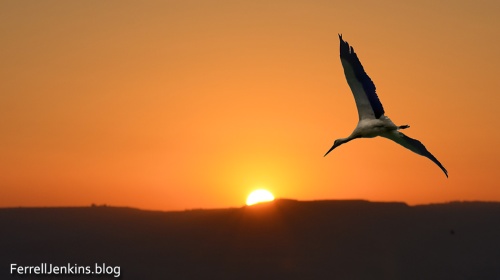 This is a composite photo showing a stork in the Jordan Valley and a sunrise over the Golan Heights. Photos by Ferrell Jenkins.

The prophet Zechariah also uses the wingspan of the stork as an illustration. In one of his visions he says,

Then I lifted my eyes and saw, and behold, two women coming forward! The wind was in their wings. They had wings like the wings of a stork, and they lifted up the basket between earth and heaven. (Zechariah 5:9 ESV)

HT: Dr. Mark Wilson, author of Biblical Turkey, who gave the directions of the Via Sebaste mentioned with the first photo to Leon Mauldin and me. An article by Mark R. Fairchild in BAR includes a map showing two possible routes from Perga in Pampylia to Pisidian Antioch. The caption with the map suggests the Via Sebaste as possibly being used by Paul, but Dr. Fairchild does not think Paul would have traveled that way. Nonetheless it is possible that Paul might have used this route in one direction or the other, more likely on the return. (Fairchild, Mark R. “Why Perga?” Biblical Archaeology Review 39.6 (2013): 53–59.)

One response to ““The stork in the heavens knows her time””