The Pool of Bethesda

The Pool of Bethesda is mentioned only once in the New Testament. At this pool Jesus healed a man who had been an invalid for 38 years.

Now there is in Jerusalem by the Sheep Gate a pool, in Aramaic called Bethesda, which has five roofed colonnades. (John 5:2 ESV)

The pool consisted of two pool near what we know today as the Lion’s Gate or Saint Stephen’s Gate to the Old City of Jerusalem. The church of Saint Anne faces the east side of the southern pool. The two pools were divided by a barrier wall between them. Citing the 1938 French publication by N. Van Der Vliet , Shimon Gibson says,

The Bethesda Pool was divided into two parts: the “Northern Pool” (53 x 40 m) which served as a reservoir for collected rainwater (with a capacity of some 21,200 cubic metres of water), and the “Southern Pool” (47 x 52 m) which was used for bathing (see below). The two pools would have been surrounded by porticoes (stoai) on four of its sides (with flat, not tiled, roofs), and with an additional portico (open on both sides) ex- tending across the barrier wall separating the two pools. The pools were not symmetrically rectangular, but were trapezoidal in form, (“The Excavations at the Bethesda Pool in Jerusalem: Preliminary Report on a Project of Stratigraphic and Structural Analysis”, pp. 17-44 in F. Bouwen (ed.), Sainte-Anne de Jérusalem. La Piscine Probatiquen de Jésus À Saladin. Proche-Orient Chrétien Numéro Spécial. 2011, Saint Anne: Jerusalem, p. 23). 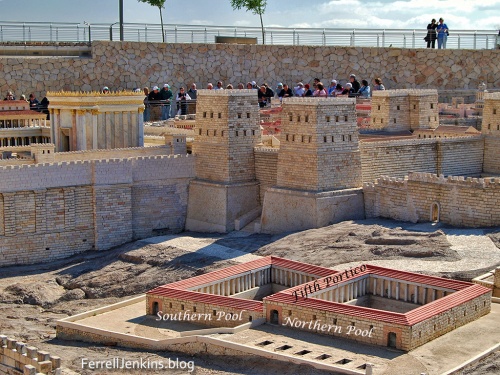 Photo of the Pool of Bethesda from the Second Temple Model, Israel Museum, Jerusalem. In this model you see the two pools with the five colonnades or porticoes, the Herodian temple, and the Antonia (the building with the four towers build to protect the temple precinct. Notice that the model shows tiled roofs which Gibson says was not the case. Photo by Ferrell Jenkins

Gibson says that the archaeological excavations have revealed that Early Roman, Late Roman, two phases of Byzantine, and the Crusader period are known here. That area now looks like this.

The excavated area of the Pool of Bethesda showing the Crusader and Byzantine ruins. Photo by Ferrell Jenkins.

This nice map from the Bible Mapper Blog shows the relationship of the Pools of Bethesda to the Temple Mount. Those who have visited the Temple Mount in recent years may have exited on the northern side and visited the Pool (or Pools) of Bethesda. As you exit there is a noticeable depression. This is where the Pool of Israel or the Sheep Pool was located. 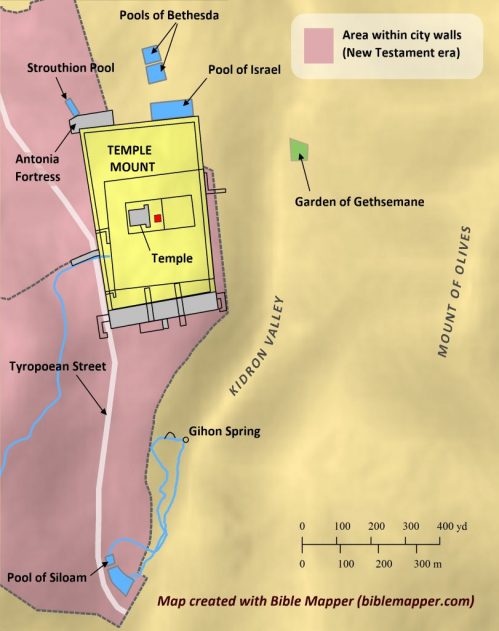 This map shows the Pools of Bethesda near the top. It comes from the Bible Mapper Blog.

The foreground of the next photo shows ruins of various pools from the Roman period that are known to have been considered a place of healing. Votive offering to Serapis and Asklepius, pagan healing gods, were found in the excavations. 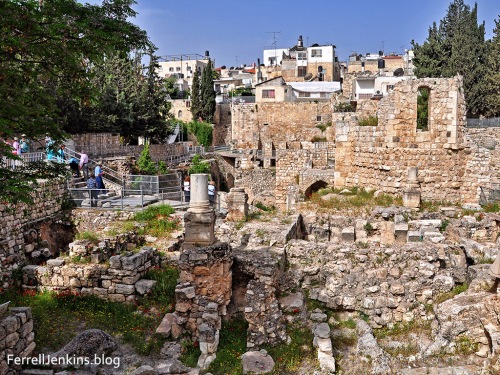 In the foreground, to the east of the church ruins, we have ruins from the Roman period showing a sacred area known to have been considered a place of healing. Photo by Ferrell Jenkins.

Even though the invalid of John 5 had been brought there by friends or neighbors (he could not have come by himself) he remained an invalid. André Parrot says Jesus,

… achieved a victory over the gods of classical paganism which had been introduced into the very heart of Jerusalem, the city of Yahweh (Land of Christ, p. 100).

3 responses to “The Pool of Bethesda”