When I see tents in the Middle East I do not think of going camping. I think of the biblical patriarchs who moved about from place to place taking their tents with them. 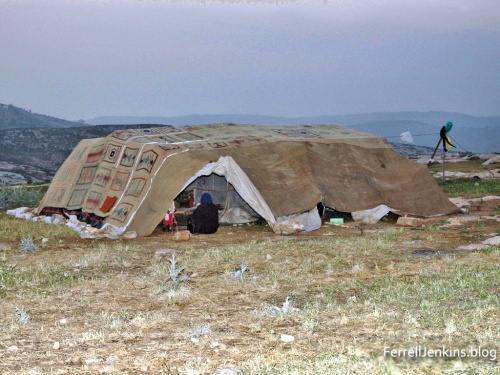 A shepherd’s tent near Heshbon, Jordan, at dusk. Photo by Ferrell Jenkins.

The book of Genesis recounts the movement of Abraham, Isaac, and Jacob as they traveled in Mesopotamia and the Levant. Notice these references:

From there he moved to the hill country on the east of Bethel and pitched his tent, with Bethel on the west and Ai on the east. And there he built an altar to the LORD and called upon the name of the LORD. And Abram journeyed on, still going toward the Negeb. (Genesis 12:8-9 ESV)

The Book of Hebrews recounts events in the life of those who lived by faith.

By faith he [Abraham] went to live in the land of promise, as in a foreign land, living in tents with Isaac and Jacob, heirs with him of the same promise. For he was looking forward to the city that has foundations, whose designer and builder is God. (Hebrews 11:9-10 ESV)

Our photo above was made at dusk when the shepherds were gathering their sheep into the sheepfold. I noticed this nicely decorated tent nearby. I see the lady of the tent sitting on the ground. There is a little child dressed in red partially visible in the tent. Notice to the right of the woman there is a screen covering for the bed. Luxury accommodations compared to some.

While viewing this photo read Genesis 18, the account of the announcement that Sarah would have a child, and see if it doesn’t become more real to you.