It is not an earth-shattering achievement, but I am pleased to have been blessed to visit most of the Bible World over the past 50 years. The only major country that eluded me is Iran. At one time I knew a couple working for an American corporation in Iran. The wife was visiting family near me and brought me eight historical and travel books about the country which are still on a top shelf in my study. She encouraged me to bring a group to the country. Not long afterwards there were many political changes in Iran and the tour never materialized.

But I have been greatly blessed to travel and to share my experiences with many others. In 2007 I began a little blog on WordPress to keep family and friends of those on my tour updated to our activities. This is now the 2000th post on ferrelljenkins.wordpress.com and ferrelljenkins.blog. The last 100 or so have been slow in coming, but finally we have reached that milestone.

Post number 2000 for ferrelljenkins.blog. This photo, without the 2000, was made at Avedat in the Negev of Israel.

Some of our blog posts have been tour reports, others have been more significant, and hopefully helpful, posts for all Bible students. A few posts have been repeats with updated information or photos.

Almost every post has included one or more photographs. The greater number of them have been photos from my collection. Over the years I have learned a lot about preparing the photos for publication (in print and on the web). We now have nearly 2700 followers who receive every post we write. According to WordPress we have reached two and a half million hits. I thank each of you for your interest. I still have former students and church friends to ask me what I have written lately! And some who see one photo and a few lines from a post mentioned on social media never click through to read the entire post. Sigh…

My hope is that you think of this blog as a sort of (incomplete) Bible Lands and Customs Dictionary. Use our indexes and the search box to locate places and customs you may be studying.

I wanted to share a few beautiful photos as a sort of celebration of the 2000th post.

Spring flowers among the ruins at Pergamum, site of one of the seven churches of the book of Revelation (2:12-17). Photo by Ferrell Jenkins.

In addition to my 50 years of tours in the Bible World and other parts of the world, I have made numerous extended trips with just another person, or up to three others. On these excursions we have been able to visit some places not easily accessible to a group with a bus. Beginning in about 1980 I have made these excursion with Melvin Curry, Phil Roberts, Harold Tabor, Jim Hodges, Raymond Harris, Curtis and Kyle Pope, David Padfield, Gene Taylor, Lowell Sallee, David McClister, Larry Haverstock, Dan Kingsley, and my lovely wife Elizabeth. Leon Mauldin has joined me on more of these personal trips than anyone else; no less than ten. Just as soon as I publish I will surely think of someone else.

One way I sometimes describe my travels, and these are included on the blog, is by a biblical timeline – from Ararat to Patmos (or Genesis to Revelation). We have discussed the possibility other sites for the biblical account of Noah and the Flood, but here is one photo of Greater Ararat in northeast Turkey.

Greater Mount Ararat, in the land of Ararat, near the Iranian border. This is the traditional site of the landing of Noah’s ark. Photo by Ferrell Jenkins.

And here is a photo of the little Greek island where John was exiled in the later years of the first century A.D.

A view of the harbor on the island of Patmos, the place where the apostle John received, and possibly wrote the Book of Revelation. Photo by Ferrell Jenkins.

This next photo was made May 13, 1970 long before we started this blog. I wanted to use this and another photo to further illustrate the extent of our travels. These photos cover the earliest period of biblical history to the close of the New Testament epistles and the Apocalypse. I only made one tour to Iraq, but we traveled from Ur, the traditional home of Abraham, to Nineveh, the capital of the Assyrians. Our scanned photo shows a reconstructed ziggurat. I always described the ziggurats to my students as a staged, or stepped, temple tower. Steve Barabas describes this ziggurat,

The ziggurat at Ur, Iraq. The remaining ruins can be seen above the reconstructed brick work. The reconstruction is about four stories high.
Photo made by Ferrell Jenkins, May 13, 1970.

If we follow the New Testament epistles to the west we come to Rome, the city where both Paul and Peter are said to have given their lives for the cause of Christ. The statue of Emperor Augustus reminds us of the power of Rome from the birth of Jesus to the close of the New Testament. 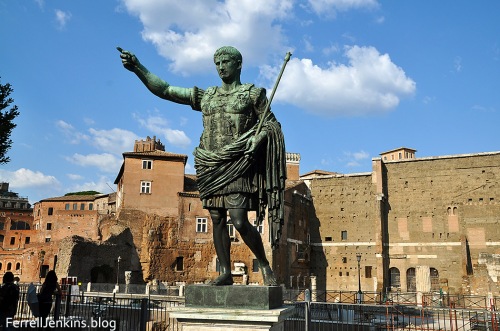 Replica of a statue of the Emperor Augustus in Rome. Photo by Ferrell Jenkins.

I have made numerous friends as a result of the blog. My first knowledge of Todd Bolen came through his Pictorial Library of Bible Lands, and we corresponded on a few items before we met. We first met in November, 2005, in Jerusalem. He frequently mentions my posts on his weekly roundup at BiblePlaces Blog. I am pleased that he now licenses my photos to publishers who wish to use them.

Other bloggers who have encouraged me include Carl Rasmussen (HolyLandPhotos blog), Charles Savelle, Wayne Stiles, and  Steve Wolfgang for his frequent re-blogging of my posts. Tom Powers has helped me correct or avoid a mistake more than once. And a host of friends who have encouraged me by letting me know they read and use our photos and learn from our comments. Without a count, I am confident that Joseph Lauer has more Hat Tips (HT) than anyone else. Many thanks for all the helpful updates he has provided.

I should add three of my former students and travelers who are now leading tours. Barry Britnell, Luke Chandler, and Leon Mauldin all have high recommendations from those who travel with them.

If you have enjoyed and profited by following this blog will you please tell at least one friend about it? Many thanks.