We have written several posts about the Roman Emperor Hadrian (A.D. 117 – 138). The most recent one was about the unique Hadrian exhibit at the Israel Museum here. Others can easily be found by putting the Emperor’s name in the Search box.

Years ago when I visited Caesarea with my groups I would see a headless statue made of porphyry thought to belong to Hadrian near the entrance to the Crusader Fortress. The statue, which was discovered accidentally in 1954, was displayed with a white marble statue on a later Byzantine street. I had asked a couple of guide friends but they did not know where the statue had been moved. A few weeks ago I spent some time trying to locate the statue in its new location but was unsuccessful.

When I realized that Larry Haverstock would be wandering around the Caesarea area for a few days ahead of joining a group tour I asked him if he would try to locate the statue.

Larry did not give up easily, and finally found the statue. Here is how he vividly describes his experience:

Turns out the elusive king’s imposing presence has been incorporated into the grounds of a large restaurant. According to Google Earth, his regal eminence is only 515 feet from the ticket seller for the Crusader Fortress / Harbor entrance at Caesarea. I just couldn’t believe it, after driving a couple of miles all around the site through banana groves and empty fields (following the museum guide’s instructions), only to discover that his headless visage had been hidden behind a fence which makes it impossible to know he’s there. In the end, I parked for free less than 200 feet from the truly impressive Emperor of Old. 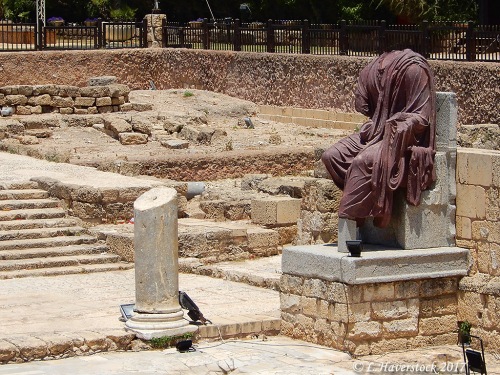 A headless porphyry statue thought to be that of Emperor Hadrian displayed at Caesarea Maritima. Photo by Larry Haverstock.

And Larry thought it helpful to pose in front of the statue to give us some idea of the size. 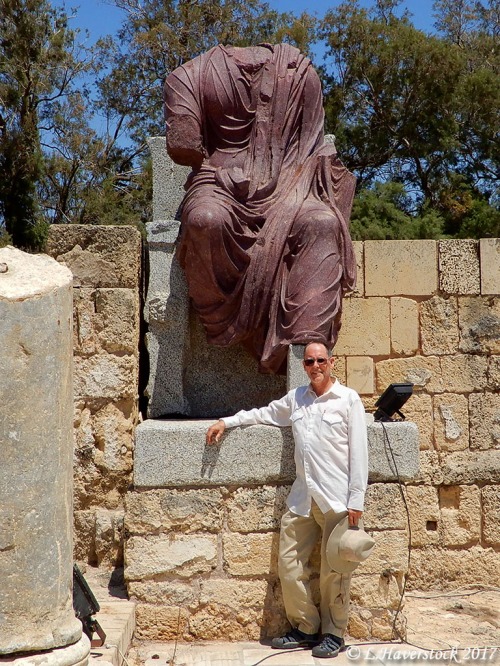 Is Hadrian important to Caesarea? Certainly. When the city began to need more water than that supplied by the aqueduct built by Herod the Great, Hadrian added another aqueduct. 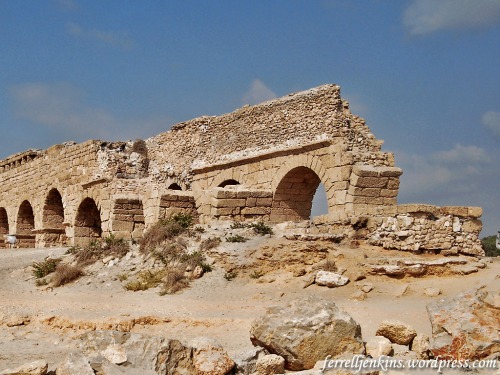 High level aqueduct at Caesarea Maritima. the portion on the right of the photo (east side) was built by Herod the Great. The portion beside it on the left (west side) was added by Hadrian. Photo by Ferrell Jenkins.

Thanks to our intrepid explorer, or as he described himself in an email today, “your antiquities sleuth in the field.”

The Apostle Paul used the harbor at Caesarea several times. He was imprisoned in the city for two years before departing for Rome (Acts 24:27; 27:1).

3 responses to “Hadrian at Caesarea Maritima”