Where did Philip baptize the Ethiopian eunuch?

In the comments below by Outremer (Tom Powers) you will see that I made a mistake in equating Ein Yael and Ein El-Haniyeh. I could see a difference in my photos and the site pictured in the video or the drawings in Thomson, The Land and the Book, but I thought the passing of time might have made the difference. I also misunderstood the statement by Vamosh that the spring was “just past the entrance to the Ein Yael Living Museum.” I understood it to mean that the spring was in that park.

Well, this is embarrassing. Under some circumstances I could delete the post, but about 2500 individuals receive an Email every time I post.

Tom’s comments also involve political matters that I understand, but for the purpose of this blog prefer not to go into. I write primarily for a group of Christians who study the Bible, but who have little knowledge of the Bible lands and customs. This blog tries to bridge that gap. Of course, I am always delighted when others find the material useful.

One of the “Must see” places for my next visit to Israel is to see Ein El-Haniyeh!

One of the “Must see” places I had on my list during the last visit to Israel was a site called Philip’s Fountain or Philip’s Spring. Miriam Feinberg Vamosh describes the location.

The spring is located about one mile southwest of the entrance to the Rephaim Valley portion of Jerusalem Park, just past the entrance to the Ein Yael Living Museum. The Rephaim Valley is mentioned frequently in the Bible, as one of the borders of the tribe of Judah (Josh. 15:5) and the scene of a battle between David and the Philistines (2 Sam. 5:17–22). (www.haaretz.com, tourist tip #302; the page is no longer available online)

The entrance to Ein Yael, where the spring and pool are located. Photo by Ferrell Jenkins.

Just before we entered the park, as well as from the park, we had some nice views of the Rephaim Valley. The northeastern end of the valley (on our left) ends at approximately the northern end of the Valley of Hinnom. 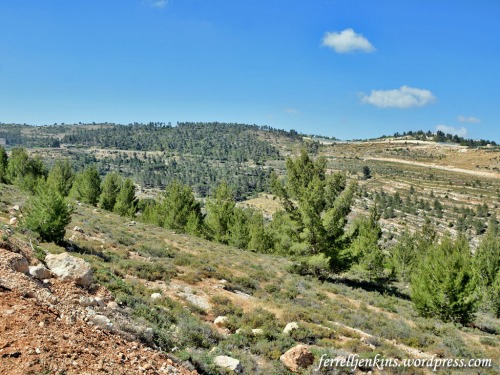 A view of the Rephaim Valley from near the entry of Ein Yael park. Photo by Ferrell Jenkins.

The New Testament site of Philip’s Spring, known in Arabic as Ein El-Haniyeh is here as well, in this southern portion of the park. It is located at the foot of the Palestinian village of Walajeh, whose people have been tilling the ancient terraces in this area for generations.

She says Christian pilgrims have been coming to Ein el-Haniyeh to recall the story recorded in Luke’s history of the early church. In Acts 8:26-39 we learn that Philip, one of the seven [deacons] who had been chosen to care for the needy disciples in Jerusalem later went to Samaria to preach (Acts 8:5). After what many preachers call a successful “work” in Samaria he was returning to Jerusalem.

Now an angel of the Lord said to Philip, “Rise and go toward the south to the road that goes down from Jerusalem to Gaza.” This is a desert place. (Act 8:26 ESV)

Whether the road itself ran through a deserted area, or the destination was at that time deserted is a matter of discussion among scholars.

The spring begins from the hillside above the Rephaim Valley. Today the water is diverted for use in the park, but you can see a channel through which some of it flows to a nearby pool. Photo by Ferrell Jenkins.

It is true that the Rephaim Valley was used as one of the main entries to Jerusalem from the coastal area, but was this where the court official of the Ethiopian queen said, “See, here is water! What prevents me from being baptized?” (Act 8:36 ESV).

Our next photo show an old pool where water from the spring is collected. Some goldfish can be seen in the far end of the pool. In spite of a nearby “Swimming is Prohibited” sign in three languages, the rope hanging over the pool indicates that boys still use it was for swimming on occasion.

Some identify the pool here as Philip’s Fountain, the site where Philip immersed the Ethiopian. Photo by Ferrell Jenkins.

A nice YouTube video here shows the site prior to the development of the park, with a cameo appearance by Shimon Gibson. In it you may see the pool in its original state.

William M. Thomson, in his The Land and the Book, mentions this site and says that it was identified “by monkish legend St. Philip’s Fountain, where he baptized the Ethiopian eunuch.” Thomson includes a drawing of ruins resembling a church at the site (The Land and the Book, 1882, pp. 55-56). This is the volume covering Southern Palestine and Jerusalem.

In a following post we will take a look at another site called Philip’s Fountain.