Less than 3 months ago we reported here on the discovery of a second century Roman road uncovered in the vicinity of Beit Shemesh and the Elah Valley. Recently we came down to the area from Hwy. 60 south of Bethlehem on Hwy. 375. The information in the IAA press release indicated that the newly discovered road was near Beit Natif (Netiv), but we saw no indication of it. We went into the village of Beit Netiv and a gentleman pointed us back toward Bethlehem and told us that we would find a road on the left where he thought some work was being done.

Following the kind gentleman’s instruction we turned successively into two roads, but neither led us to the Roman road. Finally I checked this blog and downloaded the IAA Press Release for a phone number and called the IAA office. A lady there said she did not know where the road was located but that we should give her 10 minutes and then call back for the answer. When we called back there was no answer. Hmm.

Deciding to retrace our steps we headed back toward Bethlehem again. This time we had a good view to the left of the highway and saw the Roman road. The road did not come down to the modern highway 375. How would we get to it?

We had passed the satellite antennas and the Etziyona Junction of Hwy. 367 going to Neve Micha’el when we saw the Roman road on the hillside coming down from the hill on which Ramat Beit Shemesh is built. Then we realized that the Work Area, which seems to be for road work, was the only place we could turn in. This time there was not as much equipment in the area and we saw an opening leading toward the fields and the road. We took that road and found parking out of the way of any workmen that might need to come through. Note  Hwy. 3855 coming down to Hwy. 375. The Work Area is a short distance from the junction.

I am hopeful that the annotations on this previously published aerial photo will be helpful to anyone hoping to visit this road. 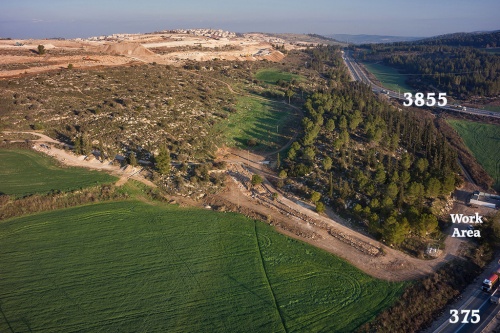 In the next photo you see the difference that a few months make in the fields. The satellite station and the turn to Hwy. 367 is a short distance to the right of this photo.

Roman road looking down to Highway 375. Photo by Ferrell Jenkins.

The Israel National Trail crosses the new road. The white, blue, and orange stripes mark this trail all over the country.

The Israel National Trail crosses the new road. The white, blue, and orange stripes mark this trail all over the country. Photo by Ferrell Jenkins.

In the short time we were there we saw two young men and three young ladies cross the 1800-year-old Roman road. The Trail continues up the field road and between the trees on the right.

Three young ladies take a break from hiking while standing on the Roman Road. Photo by Ferrell Jenkins.

I decided to take a little break on the curb of the road which is thought by the archaeologists to have provided a way from an ancient village to connect with the Emperor’s highway which comes down from the mountain ridge of Judea.

Ferrell Jenkins waiting on the curb of the Roman Road as it approaches the location of the Emperor’s Highway. Photo by Leon Mauldin.

The Roman Roads of which we find remnants in Israel today date mostly from the late first or early second century A.D. Israel Roll, who has written much on the subject, says,

The Roman road network in Judaea was not constructed at once, but evolved gradually from the First Revolt onward. Until then the Roman administration used roads that had been built during or prior to the reign of Herod. Our knowledge of those roads is scanty, and is based essentially on isolated written sources—mainly in the New Testament and Josephus. These sources do not
mention anything relating to road construction or maintenance before the beginning of the rebellion in 66 C.E. (Israel Roll, “The Roman Road System in Judaea,” Jerusalem Cathedra 3 (1983): 138.)

Paved, Roman imperial roads mostly date from the second century CE. They are broad, hard-surfaced, featuring curb stones, sometimes center stones, and even milestones. Such is not the case for village ways or paths.

Strange concludes his study with this statement:

One can readily see that a dense network of trails, tracks, and footpaths probably covered Roman-period Galilee. The network was the imprint of everyday travel in the Galilee for trade, some of it from cities like Sepphoris or Tiberias and some from villages like Nazareth or Shikhin. Part of the network is international, but the majority is formed of local trails. Some have wondered how Jesus gathered crowds, but it is simpler to imagine given such a solid web of footpaths, ways, and roads. (James F. Strange. “The Galilean Road System.” Galilee in the Late Second Temple and Mishnaic Periods. Ed. David A. Fiensy and James Riley Strange. Minneapolis: Fortress, 2014.)

The Roman road was high on my wish list for this recent personal study trip, and I am glad to have seen it with my own eyes and walked on it with my own feet. Trust you will enjoy these photos until you have the opportunity to visit the road.

Update: Reader Barry Britnell pointed out that the road I identified as Hwy. 375 (before the curve) is actually Hwy. 3855. Many thanks for the correction. I think I have made the corrections in the text for those who may be serious about locating the Roman Road.

3 responses to “More on the recently discovered Roman Road”