Visiting the Dome of the Rock

Since the late 7th century A.D. the site has been occupied by Moslem shrines, the Dome of the Rock and the Al Aksa Mosque.

Our aerial photo shows the enclosed Islamic sanctuary area that is commonly called the Haram es-Sherif. Benjamin Mazar says that this area is about 40 acres in size. He points out that Josephus and the Mishna give smaller dimensions, and says that they apparently refer to “the Soreg or sacred enclosure” (The Mountain of the Lord, 119-120). Other writers say the area is 36 acres in size. Certainly large enough for the crowds who came to Jerusalem for festivals such as the Passover and Pentecost.

Aerial view of the temple precinct from the time of Herod the Great. Today the area is occupied by Moslem shrines, Al Aksa Mosque and the Dome of the Rock. Photo by Ferrell Jenkins.

In this precinct the events of Acts 2, including the first preaching of the Gospel by the apostles of Christ, took place on the first Pentecost after the resurrection of Jesus.

In A Brief Guide to the Dome of the Rock and Al-Haram Al-Sharif, published by the Supreme Awqaf Council (1966), it is stated that the entire area, also known as the Noble Sanctuary, “is the religious center of the Muslims of the Middle East and second only to Mecca in the Muslim World” (p.1). The claim is made that,

The Prophet himself spoke of Al-Aqsa, the original name for the place and, according to tradition, made a miraculous journey to it.

This rock was once the threshing floor of Araunah purchased by David as a site upon which he built an altar to the LORD (2 Samuel 24).

The beautiful building now standing in this place is commonly called the Dome of the Rock. Here is an exterior view.

Dome of the Rock exterior. Photo by Ferrell Jenkins.

When one steps into the building he first sees a circular wall about six feet tall in the center. Drawing close, he peeks over the wall and sees a huge rock, the top of Mount Moriah. This is the centerpiece of the building. 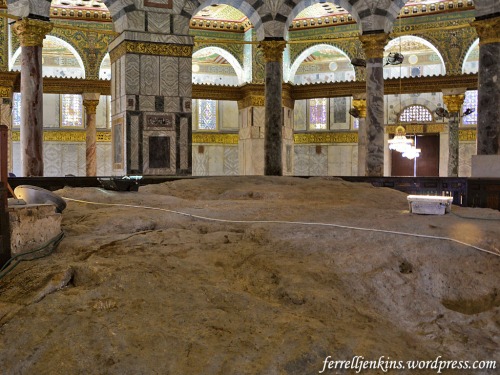 The rock around which the Dome of the Rock is built. Lights and electrical cords are laid out on the Rock. Photo by Ferrell Jenkins.

Leen Ritmeyer, one of the best experts on the Temple, believes that the rock is where Solomon built the Holy of Holies. See his Jerusalem The Temple Mount (published by Carta, 2015), pages 130-135, for details.

Over the rock is a beautiful dome. The interior is pictured here. 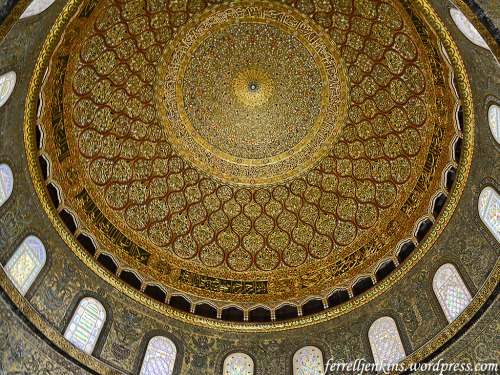 The ceiling of the Dome of the Rock. Photo by Ferrell Jenkins.

Next, we go to the cave underneath the rock. Ritmeyer says,

Walking round to the south, you reach an opening to an underground cave known as al-Maghara. This was a small natural cave, enlarged by the Crusaders and used to commemorate the angel’s announcement to Zacharias that he would have a son (Luke 1.1 3) . A hole is cut in the rocky ceiling to let the smoke from candles and incense escape (p. 132).

This photo shows the cave and a remnant of the structure built by the Crusaders.

The underground natural cave enlarged by the Crusaders for the construction of a church or chapel to commemorate the announcement to Zacharias (Luke 1:13). Photo by Ferrell Jenkins.

There is much modern history of interest, but I will leave that for your further, individual study.

3 responses to “Visiting the Dome of the Rock”