Jews will celebrate Rosh Hashanah, the Jewish new year, for two days beginning at sunset September 13. Leading up to the celebration the ram’s horn is blown.

The ram’s horn was important in the history of Israel. One of the words often used for the horn is shofar (or shophar).

I have observed that shepherds are proud of the ram of the flock. This photo was made in April, 2008, in northern Jordan not very far from Ramoth in Gilead and the border with Syria.

Ram with large horns. Photo taken in northern Jordan near ancient Ramoth Gilead, near the Syrian border in 2008. Photo by Ferrell Jenkins.

Sometimes in the Jewish Quarter of Jerusalem one of the shopkeepers will demonstrate the sounding of the shofar in hopes of attracting customers. That beautiful horn was a little above my budget. I do not know the animal from which it came. It may be a Yemenite shofar made from the horn of an African kudu. If a reader knows for sure, your comment would be appreciated. 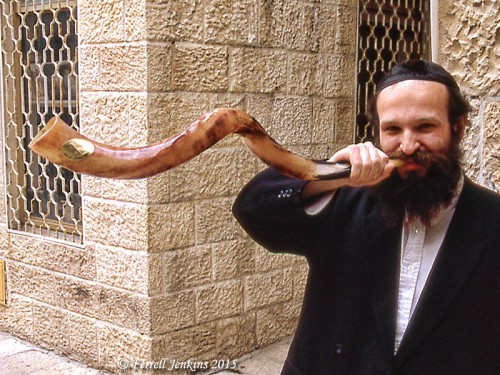 Shofar being sounded by a shop owner or clerk in the Jewish Quarter, Jerusalem, in 1993. Photo by Ferrell Jenkins.

Silver trumpets were also to be blown on certain occasions (Numbers 10:1).

For Christians, the sound of a trumpet will signal the coming of the Lord and the resurrection.

For the Lord himself will descend from heaven with a cry of command, with the voice of an archangel, and with the sound of the trumpet of God. And the dead in Christ will rise first.  Then we who are alive, who are left, will be caught up together with them in the clouds to meet the Lord in the air, and so we will always be with the Lord.  Therefore encourage one another with these words. (1 Thessalonians 4:16-18 ESV)

Behold! I tell you a mystery. We shall not all sleep, but we shall all be changed,
52 in a moment, in the twinkling of an eye, at the last trumpet. For the trumpet will sound, and the dead will be raised imperishable, and we shall be changed.
(1 Corinthians 15:51-52 ESV)