Aphek – where the Philistines were encamped

One of the significant battles between Israel and the Philistines took place during the time of Samuel when the ark of the covenant was located in the tent of meeting at Shiloh.

Israel encamped at Ebenezer, and the Philistines encamped at Aphek in the plain of Sharon. This indicates that the two places were fairly close to each other. Aphek is located about 21 miles west of Shiloh. Ebenezer is about 2 miles east of Aphek.

Herod the Great built a city at the site of Aphek and named it Antipatris in honor of his father.

Herod was also a lover of his father, if any other person ever was so; for he made a monument for his father, even that city which he built in the finest plain that was in his kingdom, and which had rivers and trees in abundance, and named it Antipatris. He also built a wall around a citadel that lay above Jericho, and was a very strong and very fine building, and dedicated it to his mother, and called it Cypros. (Jewish Wars 1:417)

Because Aphek/Antipatris sat on a major south-north and west-east routes, it was dominated by many nations. The dominant feature of the site today is the Turkish fort. Inside are the excavated ruins of buildings from Canaanite to Herodian/Roman times.

The apostle Paul stayed overnight at Antipatris on his journey from Jerusalem to Caesarea (Acts 23:31).

Aphek/Antipatris is known by the modern name Ras el-Ain because it is located at the headwaters of the Yarkon River which flows into the Mediterranean about 11 miles to the west. 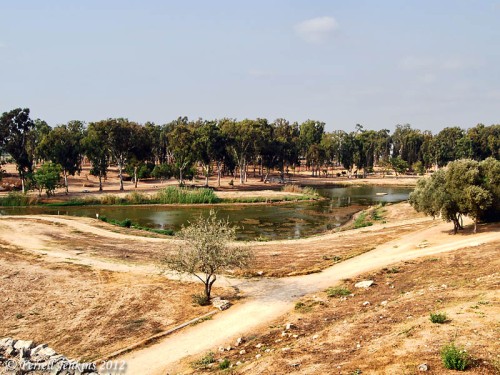 Source of the Yarkon River at Aphek/Antipatris. Photo by Ferrell Jenkins.

Aphex/Antipatris is now dominated by the ruins of an Ottoman fortress. 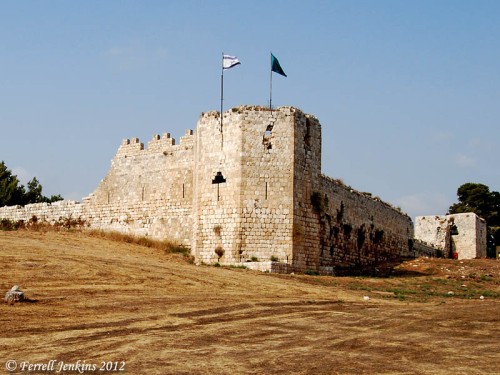 The Ottoman fortress at Aphek/Antipatris. Photo by Ferrell Jenkins.

Our final photo shows the fortress and the source of the Yarkon River from the air. Notice in the previous photos the grass is brown. Those photos were made in August. The next photo was made in December and the grass is green. 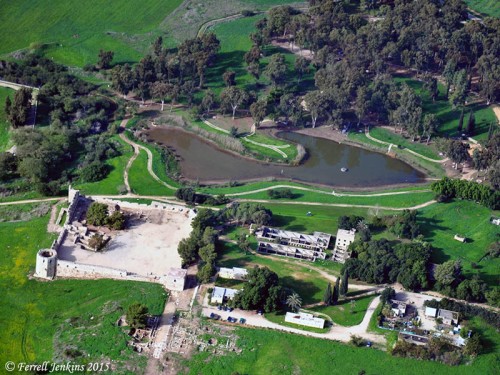 In the next post we plan to write about “The Other Aphek.”