Lake Van in eastern Turkey is a large inland body of water of about 1400 square miles at an elevation of 5737 feet. The lake is fed by a number of rivers and is highly alkaline. It is said that folks sometimes wash their clothes in the lake. Along the south side of the lake the elevation reaches 7324 feet at one point. 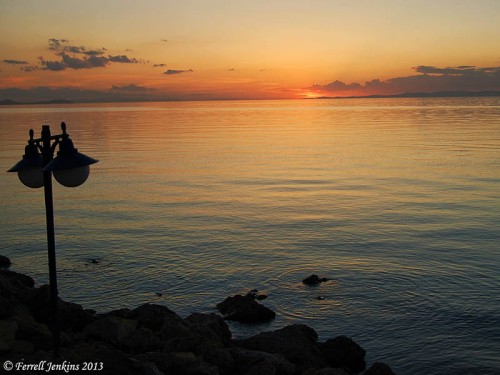 In Assyrian records this area was called Urartu. In the Bible it is called Ararat. The English term Ararat is a transliteration of the Hebrew term. The four references where the term appears are Genesis 8:4, 2 Kings 19:37 = Isaiah 37:38, and Jeremiah 51:27. The King James version uses the term Armenia in 2 Kings 19:37 and Isaiah 37:38 because that is what the territory was later called. The Septuagint uses Armenia only in Isaiah 37:38.

The ark of Noah is said to have “rested upon the mountains of Ararat” (Gen. 8:4). Note that it does not say “Mount Ararat” but the “mountains of Ararat.” The assassins of Sennacherib, after killing the king of Assyria at Nineveh in 681 B.C., escaped into “the land of Ararat” (2 Kings 19:37; Isaiah 37:38). Jeremiah called upon the kingdom of Ararat to fight against Babylon (Jeremiah 51:27).

2 responses to “Sunset on Lake Van in Eastern Turkey”