The photo I am sharing today was made at ancient Xanthos, a city of Lycia, now in southwestern Turkey. The city is situated in the Lycian mountains a few miles from the Mediterranean coast and the ancient city of Patara (Acts 21:1). The small town of Kinik lies in the valley below Xanthos. 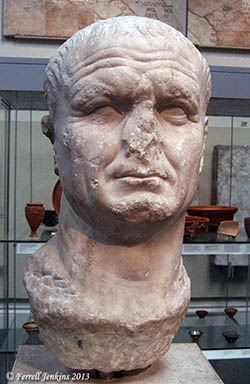 A road runs up the hill through the ancient ruins. One of the first monuments we come to is a Roman arch dedicated to the emperor Vespasian  (A.D. 69-79) by the Council and People of Xanthos. George E. Bean says,

The pavement which survives in part belongs to an ancient road which led up from Patara and the Letoum. – Lycian Turkey, 60.

Our view is made from above the arch. To the left you can see the narrow modern road leading to the parking lot at Xanthos.

This photo illustrates the build up of debris over the centuries.

Writers such as Bean tell of the time when the Persians conquered western Asia about 540 B.C. Rather than surrender, the fighting men of Xanathos placed their women, children, slaves, and property on the acropolis and set fire to it. These men then went forth and fought to the death.  This account reminds us of the one recorded by Josephus about the fall of Masada during the Jewish Wars against the Romans (The Jewish War 7.8.6).

For more information about Xanathos, and Lycia in general, see the nice Lycian Turkey website here.