Herod the Great in the news

Herod is well known to students of the Bible. He is known especially as the king who was so frightened of losing his power that he ordered the death of the one who was born king of the Jews (Matthew 2).

Herod is also known from other historical records such as the Antiquities of the Jews and Wars of the Jews by Josephus.

We have learned much about Herod from the archaeological excavations at sites he is known to have built. We think of the Temple in Jerusalem with its platform and enclosure, the temples dedicated to Emperor Augustus at Caesarea Maritima, Samaria, and Caesarea Philippi (or Omrit), and the fortresses in several parts of the country, and the building at the Cave of Machpelah in Hebron.

The Herodium has received much attention in recent years as a result of the archaeological excavation conducted by the late Prof. Ehud Netzer in his search for Herod’s tomb. 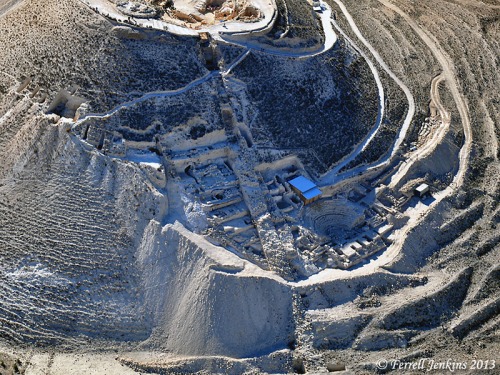 Aerial view of the Herodium with the area of Netzer’s excavation visible. All of this was covered by earth just a few years ago. Photo by Ferrell Jenkins.

Now we are informed that the tomb of Herod at the Herodium is to be rebuilt.

The glory of King Herod, the Judean king famous for renovating the Temple Mount and building Masada, will rise again — or at least his tomb will — Israel announced Monday. As part of a new plan, a replica of his tomb at Herodium, situated outside the West Bank city of Bethlehem, will tower to 83 feet and will be visible from Jerusalem.

Herodium, an impressive feat of ancient engineering, is a conical artificial mound built between 23 and 15 BCE that housed a fortified royal palace and tomb. Its walls rose over 200 feet high and it contained elegant courtyards and baths. It was the only one of Herod’s many famed construction projects that bore his name, and was destroyed in 70 CE during the Great Revolt against Rome.

To read this report from the Times of Israel in its entirety, click here.

It must be the year of Herod. The Israel Museum is reconstructing the tomb of Herod in the museum for an exhibition opening February 12, 2013. I am definitely looking forward to seeing this. Read more about it here.