Could the “Herodian Mansion” have been the house of Annas the high priest?

Archaeological architect Leen Ritmeyer is interviewed by Justin Taylor about the “Palatial Mansion” or “Herodian Mansion” here. Ritmeyer takes the position that the Palatian Mansion, identified as the Wohl Museum, may be “the place of residence for Annas the high priest.”

While I appreciate the way that Ritmeyer makes these discoveries so accessible to the average Bible reader, I am less optimistic that this particular house is the very house where Jesus stood on trial and Peter denied the Lord. In favor of making this positive identification is the fact that this is the largest house known from this time period in Jerusalem. On the other hand, most of the land in the Old City has never been excavated. If there were 100 houses in Jerusalem in the first century, how likely is it that the only complete one excavated is the same one mentioned in the Bible?

A similar claim is made for the site known as Saint Peter in Gallicantu. Tour groups to Jerusalem often visit both sites. Maybe one of these places is the house of Annas and Caiaphas, and maybe not. Each may provide a good illustration of what happened when Jesus was brought before the high priest. I often say to my groups, “It may not have been right here, but it wasn’t far away.” 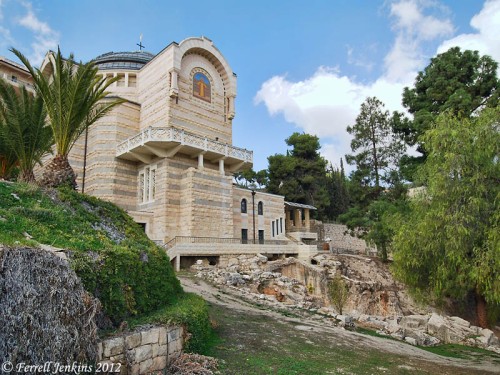 St. Peter in Galicantu, Jerusalem. This exterior view shows the modern building covering the excavation that some suggest was the house of the high priest. Photo by Ferrell Jenkins.

In comments to the Ritmeyer interview, Shannon Brown shares an album of photos he made at the Wohl Museum a few years ago.

4 responses to “Could the “Herodian Mansion” have been the house of Annas the high priest?”