How long would it take to provide photo illustrations for Acts 13? Here are some of the places and persons we might consider.

Not to mention the historical references in Paul’s sermon in the synagogue at Pisidian Antioch. (You can find posts about most, if not all, of the above list by using the Search box.)

For today, I have chosen to call attention to Barnabas and his association with Cyprus. The first stop made by Barnabas, Saul, and John Mark on Cyprus was at the eastern port of Salamis. A few miles west of the harbor and ancient city we now have the Monastery and Church of St. Barnabas. Salamis, and this building, are now located in the Turkish Republic of Norther Cyprus. The folks in the south, the Republic of Cyprus, speak of the north as occupied territory. (I leave the politics of the issue for others.) The monastery and church, erected in A.D. 477, now houses an icon museum and a small archaeological museum.

Tradition has it that Barnabas was martyred by Jews on Cyprus, but we have no evidence to back up this assertion. 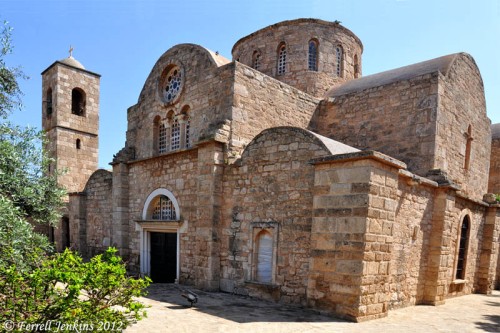 Acts 4:36 informs us that Joseph was also called Barnabas by the apostles. The name Barnabas means Son of Encouragement or Exhortation. He must have been an eloquent speaker, especially good at exhorting and encouraging others. He was generous with his property, a good man, full of the Holy Spirit and of faith (Acts 11:24).

Barnabas was of the tribe of Levi and a native of the island of Cyprus. He later introduced Saul of Tarsus (Paul) to the brethren in Jerusalem (Acts 9:26-27) and preached in Antioch (Acts 11:22-30). Barnabas, and his cousin John Mark (Colossians 4:10), joined Saul for the first preaching journey (Acts 13-14).

After a sharp disagreement between Barnabas and Paul, Barnabas took Mark with him to Cyprus (Acts 15:39). One wonders if Mark also was a native of Cyprus.