Ruins of the Roman City of Volubilis in Morocco. Slide by Ferrell Jenkins, 1980.

A feature at Seattlepi.com says that Morocco’s Roman ruins are “Stunning, with few tourists.” The article describes Volubilis,

The jewel in the crown of Morocco’s Roman ruins is certainly Volubilis, located at the foot of the Atlas mountains in a sweeping valley filled with olive and almond trees.

This city of 20,000 was the westernmost extremity of an empire that once stretched to the gates of Persia. The sprawling floor plans of its buildings and brilliant floor mosaics suggest great wealth.

The site is dominated by the remains of the grand public buildings around the forum, with the impressive arches of the Basilica courthouse arrayed in front of pillars of the temple to the god Jupiter — now topped by bushy stork nests. Every old ruin in Morocco appears to host its own of population of the large black and white birds, which soar over the sites or preen in their nests as tourists snap away with cameras. 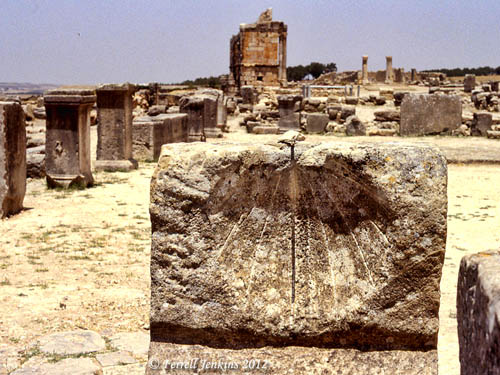 Ruins of the Roman City of Volubilis in Morocco. Slide by Ferrell Jenkins, 1980.

Students of the New Testament realize that the Roman Empire was vast. Volubilis became part of the Roman province Mauretania Tingitania under the Emperor Claudius in A.D. 45. Claudius was Emperor from A.D. 41-54 during the time of Paul’s journeys to spread Christianity throughout the Empire (Acts 18:2).

And he [Paul] found a Jew named Aquila, a native of Pontus, recently come from Italy with his wife Priscilla, because Claudius had commanded all the Jews to leave Rome. And he went to see them, (Acts 18:2 ESV)

Twice I have taken tours to Volubilis, about 20 miles from Meknes. Most of the ruins we see today date from the second and third centuries A.D.

Volubilis has been added to the list of World Heritage Sites because “this site is an exceptionally well preserved example of a large Roman colonial town on the fringes of the Empire.”

The feature about Morocco’s Roman ruins may also be read at CBS News here.

One response to “Roman Volubilis — “Stunning with few tourists””