It is true that we refer to him as Herod the Great because of the power he exerted, his long reign, the sons he appointed as rulers, and the massive buildings and fortresses he constructed.

In character he was small or little.Notice the account of the birth of Jesus in Matthew 2, and Herod’s reaction to the news of the wise men from the east.

1 Now after Jesus was born in Bethlehem of Judea in the days of Herod the king, behold, wise men from the east came to Jerusalem,  2 saying, “Where is he who has been born king of the Jews? For we saw his star when it rose and have come to worship him.”  3 When Herod the king heard this, he was troubled, and all Jerusalem with him;  4 and assembling all the chief priests and scribes of the people, he inquired of them where the Christ was to be born.  5 They told him, “In Bethlehem of Judea, for so it is written by the prophet:  6 “‘And you, O Bethlehem, in the land of Judah, are by no means least among the rulers of Judah; for from you shall come a ruler who will shepherd my people Israel.'” 7 Then Herod summoned the wise men secretly and ascertained from them what time the star had appeared.  8 And he sent them to Bethlehem, saying, “Go and search diligently for the child, and when you have found him, bring me word, that I too may come and worship him.” (Matthew 2:1-8 ESV)

When Herod learned that he had been tricked he was outraged, and made plans to kill not only Jesus but all of the male children in the Bethlehem region that were under two years of age.

Then Herod, when he saw that he had been tricked by the wise men, became furious, and he sent and killed all the male children in Bethlehem and in all that region who were two years old or under, according to the time that he had ascertained from the wise men. (Matthew 2:16 ESV)

I have found it ironic that one of the most important of Herod’s building programs was the fortress known as the Herodium built within sight of Bethlehem. Nonetheless, this king feared an infant. Little men always fear those who threaten their power.

Here is a photo of the Herodium with some of the ruins of the lower Herodium in the foreground. 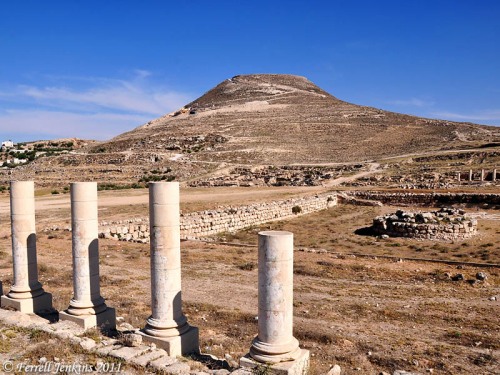 The Herodium with ruins of lower Herodium in the foreground. Photo by Ferrell Jenkins.

The artificial conical structure was built by Herod as one of his fortresses. This fortress is located about 8 miles south of Jerusalem, 3 1/2 miles east of Bethlehem, on the western edge of the Wilderness of Judea.

The tomb of Herod the Great was discovered about half way up the north side in 2007 by the late Prof. Ehud Netzer. You may use the search box to locate other articles about the Herodium, including some aerial photos.

A few years ago I called attention to a psychological study of Herod. I see the review of the scholarly book is still available at Haaretz here. If you have thought or read that he was cruel, just wait till you read this.