The Parthenon — in Athens, Greece, and in Athens of the South

The Parthenon in Athens, Greece, is one of the most famous architectural landmarks on earth. The building was erected on the Acropolis in the fifth century B.C. According to Fant and Reddish, “the cult statue of Athena stood in the east cella, surrounded by a colonnade of twenty-three columns and an entrance portico with six columns.”

Completed in 438 B.C.E. the statue of Athena was designed and constructed by Phidias himself. On its base it stood nearly 40 feet tall, supported by a massive post. The face and hands were of ivory. According to Thucydides, more than 40 talents of gold (approximately 250 lbs.) were used to plate the remainder of the enormous statue. These plates were removable so that the weight of the gold could be checked periodically. The goddess stood upon a large platform upon which the Pandora myth was depicted. Her left hand rested upon her shield, her spear leaned against her left shoulder, and in her right hand she held a small image of Nike. The statue eventually was carried off to Constantinople and destroyed there in 1203 C.E. (Fant and Reddish, A Guide to Biblical Sites in Greece and Turkey, Oxford, 30-31)

Nashville, Tennessee, had nicknamed itself the Athens of the South by the mid 19th century. In 1897 a replica of the Greek Parthenon was built in Nashville’s Centennial Park. After yesterday’s post about the original Parthenon, my friend Ken Green, who lives in Nashville, wrote that he was sure I had seen the Parthenon, but wondered if I had seen the 42-foot statue of Athena which was unveiled to the public in 1990. In earlier years I have lived in Alabama and Kentucky, with frequent trips through Nashville, but I have not seen the Athena statue. Fortunately, my friend David Padfield visited Nashville last year and made some nice photos (as usual). He has graciously allowed me to share a couple of these photos with our readers.

The first photo shows the exterior of the Nashville Parthenon. 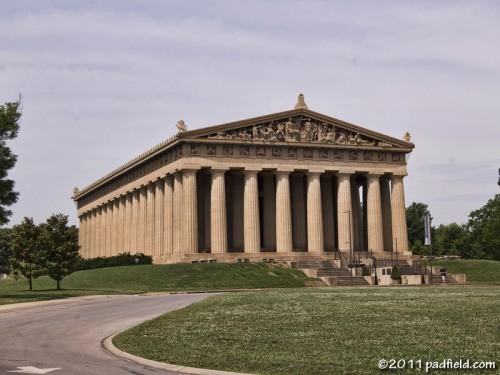 The Parthenon in Nashville, Tennessee. Photo by David Padfield.

The next photo shows the statue of Athena as it is displayed in the Parthenon. 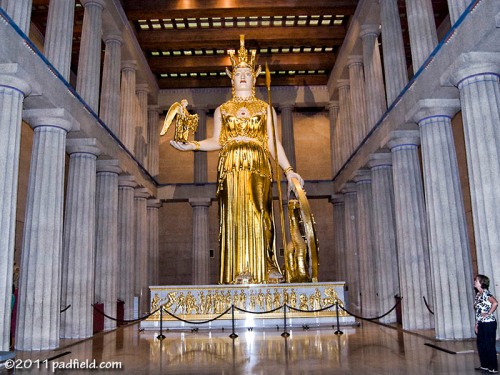 Athena in the Parthenon in Nashville, Tennessee. Photo by David Padfield.

Now while Paul was waiting for them at Athens, his spirit was being provoked within him as he was observing the city full of idols. (Acts 17:16 NAU)

“Being then the children of God, we ought not to think that the Divine Nature is like gold or silver or stone, an image formed by the art and thought of man. (Acts 17:29 NAU)

You may read more about the Nashville Parthenon at the official city website here.