Looking through some slides, I found a nice photo of Lystra. In this photo from 1987 you will see that farmers have plowed the slopping side of the tell as far as practical. Often we see crops growing on the top of a tell, especially one that has not been excavated.

From another year, likely in the 80s, the sower is broadcasting seed. This is a practice that I saw frequently while growing up in the rural South. We rarely see this practice in the modern days of mechanization either in the USA or in the Bible World. 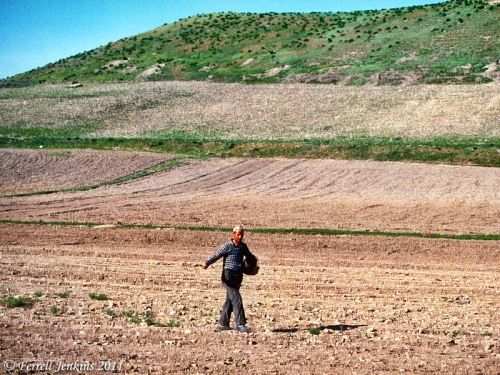 The practice of the sower scattering seed is mentioned several times in the Bible. Notice Isaiah 55:10-11.

For as the rain and the snow come down from heaven, And do not return there without watering the earth And making it bear and sprout, And furnishing seed to the sower and bread to the eater;  So will My word be which goes forth from My mouth; It will not return to Me empty, Without accomplishing what I desire, And without succeeding in the matter for which I sent it.  (Isaiah 55:10-11 NAU)

Notice Paul’s use of the Isaiah text in 2 Corinthians 9:10.

We think also of the parables of Jesus.

3 And He spoke many things to them in parables, saying, “Behold, the sower went out to sow;  4 and as he sowed, some seeds fell beside the road, and the birds came and ate them up.  5 “Others fell on the rocky places, where they did not have much soil; and immediately they sprang up, because they had no depth of soil.  6 “But when the sun had risen, they were scorched; and because they had no root, they withered away. 7 “Others fell among the thorns, and the thorns came up and choked them out. 8 “And others fell on the good soil and yielded a crop, some a hundredfold, some sixty, and some thirty.  9 “He who has ears, let him hear.” (Matthew 13:3-9 NAU)

One response to “Illustrations from Lystra”