Finally got the photo uploaded

I was unable to upload one of the photos about goats in the Sinai peninsula earlier. Finally got it uploaded. If you missed seeing the photo of the nanny goat caring for the newborn kid, please take a look now.

Goats in the Bible world

Travel in the Middle East provides many illustration similar to life in Bible times. We are more likely to see these illustrations where we have less modernization. The photos I wish to share today come from the Sinai peninsula. Last January we stopped at a Bedouin settlement on the way from the Suez Canal to Mount Sinai. Our timing was good. A goat had just given birth to a kid. While the nanny was keeping the kid moving around, two of the Bedouin boys were standing by keeping watch. Remembering my own childhood on a farm, I am sure the boys could hardly contain themselves from helping the kid. They had probably been told many times that it would be a big mistake to do so. 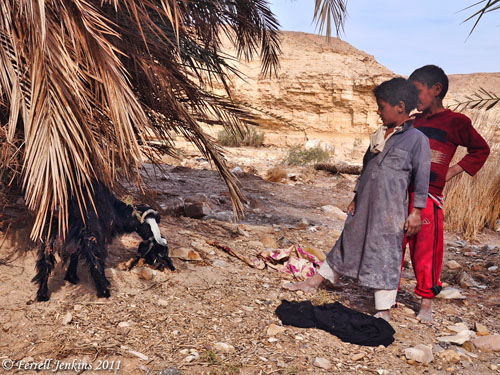 The earliest biblical reference to the goat is in Genesis 15:9, the account of Abraham’s sacrifice after the giving of the land covenant. A three year old female goat was among the animals offered. The LORD later commanded Israel to offer goats in their sacrifices.

This photo shows the nanny’s care for the still-wet newborn.

Goats were used for food. In Rachel’s attempt to have Isaac bless Jacob she prepared “delicious food” for Isaac.

Now therefore, my son, obey my voice as I command you. Go to the flock and bring me two good young goats, so that I may prepare from them delicious food for your father, such as he loves. And you shall bring it to your father to eat, so that he may bless you before he dies. (Genesis 27:8-10 ESV)

Goats’ hair and goatskins were used In the construction of the Tabernacle (Exodus 25:4-5 et al.).

The goat was among the clean animals that could be eaten (Deuteronomy 14:4).

One of the wise sayings of Solomon mentions goats’ milk for food.

There will be enough goats’ milk for your food, for the food of your household and maintenance for your girls. (Proverbs 27:27 ESV).