Herod the Great didn’t do it all

Archaeologists in Jerusalem announced yesterday a new discovery that changes popular thinking about the building of the walls around the Temple Mount. It is not much of a surprise. We already knew that the Roman Street found at the SW corner of the wall dates to the period just before the destruction of Jerusalem by the Romans in A.D. 70. The last paragraph of the press release mentions that what was found was in harmony with the account of Josephus.

I have understood John 2:20 to be saying that work on the temple precinct was continuing as late as A.D. 26/27. That is a major reason this is not a surprise.

Then the Jewish leaders said to him, “This temple has been under construction for forty-six years, and are you going to raise it up in three days?” (John 2:20 NET)

Here is a portion of the press release issued by the Israel Antiquities Authority. I am leaving it full width for easier reading.

Professor Ronny Reich of the University of Haifa and Eli Shukron of the Israel Antiquities Authority: A ritual bath exposed beneath the Western Wall of the Temple Mount shows that the construction of that wall was not completed during King Herod’s lifetime.

Who built the Temple Mount walls? Every tour guide and every student grounded in the history of Jerusalem will immediately reply that it was Herod. However, in the archaeological excavations alongside the ancient drainage channel of Jerusalem a very old ritual bath (miqwe [mikve]) was recently discovered that challenges the conventional archaeological perception which regards Herod as being solely responsible for its construction.…

In an excavation beneath the paved street near Robinson’s Arch, sections of the Western Wall’s foundation were revealed that is set on the bedrock — which is also the western foundation of Robinson’s Arch — an enormous arch that bore a staircase that led from Jerusalem’s main street to the entrance of the Temple Mount compound.

According to Professor Reich, “It became apparent during the course of the work that there are rock-hewn remains of different installations on the natural bedrock, including cisterns, ritual baths and cellars. These belonged to the dwellings of a residential neighborhood that existed there before King Herod decided to enlarge the Temple Mount compound. The Jewish historian Josephus, a contemporary of that period, writes that Herod embarked on the project of enlarging the compound in the eighteenth year of his reign (that is in 22 BCE) and described it as “the largest project the world has ever heard of.”

When it was decided to expand the compound, the area was confiscated and the walls of the buildings were demolished down to the bedrock. The rock-cut installations were filled with earth and stones so as to be able to build on them. When the locations of the Temple Mount corners were determined and work was begun setting the first course of stone in place, it became apparent that one of the ritual baths was situated directly in line with the Western Wall. The builders filled in the bath with earth, placed three large flat stones on the soil and built the first course of the wall on top of this blockage.

While sifting the soil removed from inside the sealed ritual bath, three clay oil lamps were discovered of a type that was common in the first century CE. In addition, the sifting also yielded seventeen bronze coins that can be identified. Dr. Donald Ariel, curator of the numismatic collection of the Israel Antiquities Authority, determined that the latest coins (4 in all) were struck by the Roman procurator of Judea, Valerius Gratus, in the year 17/18 CE. This means that Robinson’s Arch, and possibly a longer part of the Western Wall, were constructed after this year – that is to say: at least twenty years after Herod’s death (which is commonly thought to have occurred in the year 4 BCE).

This bit of archaeological information illustrates the fact that the construction of the Temple Mount walls and Robinson’s Arch was an enormous project that lasted decades and was not completed during Herod’s lifetime.

This dramatic find confirms Josephus’ descriptions which state that it was only during the reign of King Agrippa II (Herod’s great-grandson) that the work was finished, and upon its completion there were eight to ten thousand unemployed in Jerusalem.

If you wish to see the complete press release click here.

Below are a few of the photos provided by the IAA. The first shows the lowest course of the wall resting on bedrock. 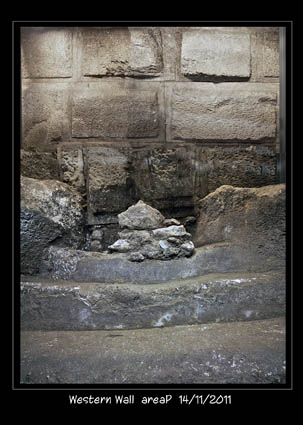 The first course of the wall resting on the bedrock. Photograph: Vladimir Naykhin.

The next photo shows one of the coins dating to the time of Roman Procurator Valerius Gratus in the year A.D. 17/18. He was procurator A.D. 15-26, and followed by the better known Pontius Pilate (A.D. 26-36).

A coin of the Roman procurator Valerius Gratus, which helped in dating the construction of Robinson’s Arch. Courtesy IAA.

The third photo shows some of the workers excavating the area. 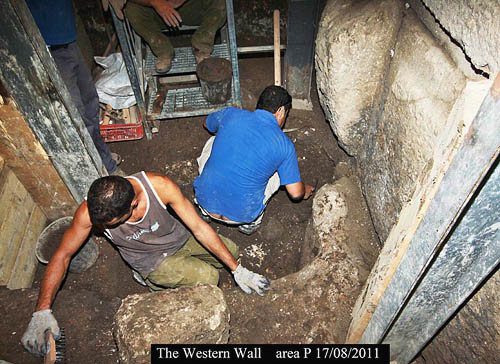 After writing my post, I see that Todd Bolen accuses the IAA of being “desperate for headlines.” See his comments here.

2 responses to “Herod the Great didn’t do it all”