Mount Hermon from the Damascus Road

Mount Hermon is the southern end of the Anti-Lebanon mountain range. The mountain is about 20 miles long and has three peaks. At 9,232 feet above sea level it is the highest mountain of Canaan, or Roman Syria, named in the Bible. The mountain now is shared by the countries of Lebanon, Syria, and Israel. The photo below shows mount Hermon from the east, a few miles south of Damascus toward Quneitra. This is roughly the route of the famous Damascus Road taken by Paul as he went from Jerusalem to Damascus. This photo was made the middle of May, 2002. There was more snow on the west side of the mountain in Lebanon than you see here. 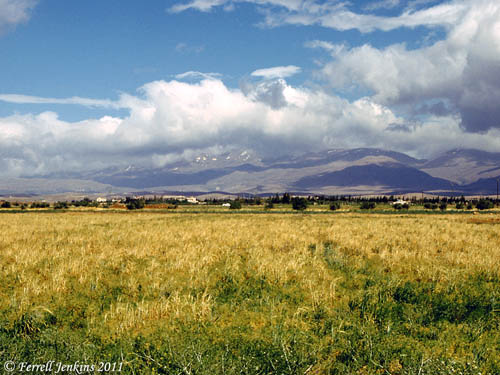 This post is a slightly revised post from 2009, but the photo is a new one digitized from a slide made in 2002.