British Library launches a campaign to raise $14.3 million for a 1300 year old copy of the Gospel of John. St. Cuthbert’s Gospel is said to be Europe’s oldest book. The Latin book is also called the Stonyhurst Gospel.

Information about the small bound book may be read here. The British Library has a nice video about the book, including clear images, may be viewed here. (HT: Paleojudaica).

Latin works such as this one play an important role in the history of the English Bible.

Wood used in the Roman siege of Masada came from other areas, according to a study by scientists at the University of Haifa.

First, the researchers examined the amount of wood that exists today in the Judean Desert and in the wadi deltas in the vicinity of Masada, and thereby were able to estimate the amount and types of wood that the desert could supply. Next, they calculated the amount of timber and firewood that would have been needed for the inhabitants of Masada, from 150 BCE, when it was a small fortress, through the Herodian period, when the fortress as we know it was constructed, and up to the siege, which ended in 73 CE. According to the researchers, in those times, timber was mostly used for construction, heating and cooking. Based on accepted evaluations of wood consumption for these purposes in traditional societies, on the conservatively estimated number of Masada inhabitants in each time period, the harsh climatic conditions in the desert and Masada’s topography, the researchers were able to conclude that by the time the Romans arrived at Masada and began their siege (73 CE), the entire area was void of timber and firewood, due to 2,220 years of massive exploitation of the immediate environment up to that point. The Romans would have had no choice but to import wood from other areas for their weapon machinery, ramparts and basic living requirements.

The brief report may be read here. (HT: Joseph Lauer)

As Lewis explained, “There is no uncreated being except God. God has no opposite. . . . The proper question is whether I believe in devils. I do. That is to say, I believe in angels, and I believe that some of these, by the abuse of their free will, have become enemies to God. . . . Satan, the leader or dictator of devils, is the opposite, not of God, but of Michael.”

In his original preface written from Magdalen College at Oxford on July 5, 1941, Lewis warned of what he called “the two equal and opposite errors into which our race can fall about the devils.” One error “is to disbelieve in their existence. The other is to believe and to feel an excessive and unhealthy interest in them.” Lewis concluded that the devils “are equally pleased by both errors, and hail a materialist or a magician with the same delight.”

Dr. David McClister, Bible professor at Florida College, visited Oxford during his summer break. He shares one of his photos of Lewis’s study at the Kilns. 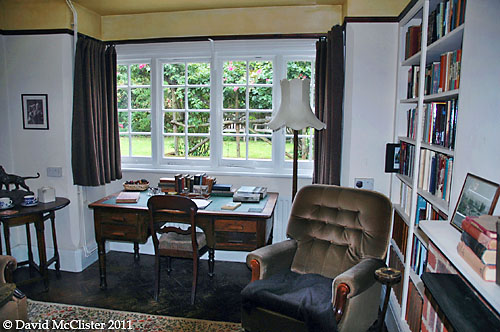 No wonder Lewis accomplished so much. No phone. No computer. If you are a fan of any of Lewis’s work, you might enjoy our earlier photos and info here.