The Senir, a source of the Jordan River

The longest source of the Jordan is the 24-mile-long Nahr Hasbani which begins in the Beka Valley of Lebanon and flows south to join the Jordan. Israel has replaced many of the Arabic names that were commonly used in earlier decades with Hebrew names. The Old Testament says that the Sidonians “call Hermon Sirion, and the Amorites call it Senir” (Deuteronomy 3:9). The river is now designated Senir in Israel.

At the Senir (Hasbani) on Israel Highway 99. Photo by Ferrell Jenkins.

Other passages identifying Mount Hermon as Senir are 1 Chronicles 5:23, Song of Solomon 4:8, and Ezekiel 27:5. Nelson Glueck, The River Jordan, calls attention to Psalm 42:6, translating it this way:

O my God, my soul is cast down within me: Therefore am I mindful of thee from the land of the Jordan, and the Hermons” (Psalm 42:6)

The plural of the Hebrew word chermonim is bought out in the English translations by phrases like “peaks of Hermon” or “heights of Hermon.”

Israel Highway 99 runs north east from Kiryat Shmona to the Golan Heights past Tel Dan and Banias (Caesarea Philippi) and two other sources of the Jordan (the River Dan and the River Banias). Because this river begins in the vicinity near Mount Hermon, it is called the Senir.

The photo below is the view north from Highway 99. 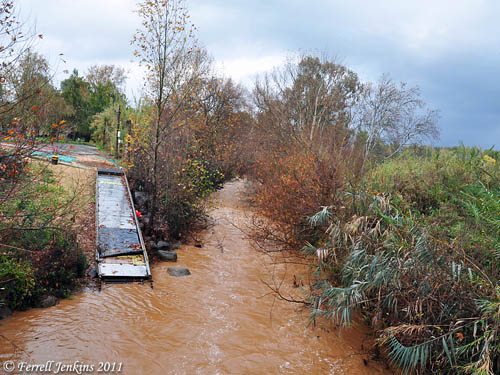 I think the slide on the west side of the river is used to launch kayaks into the river.