A rooster can wake you up

Having been brought up in the country, I learned early about the annoyance of the rooster as well as his usefulness. His crowing awakened those who wanted to get up early and those who would have preferred sleeping. Without the rooster there would be no more chicks. Bantam roosters were especially known for their strutting. The writer of Proverbs mentioned this attribute:

Three things are stately in their stride, even four are stately in their walk: a lion, which is mightiest among beasts and doesn’t retreat before anything, a strutting rooster, a goat, and a king at the head of his army. If you have been foolish by exalting yourself or if you’ve been scheming, put your hand over your mouth. For the churning of milk produces butter, and twisting a nose draws blood, and stirring up anger produces strife. (Proverbs 30:29-33 CSB)

The rooster strutted as if he owned the yard. Our backyard was barren. Chicken scratch was scattered across the yard and the chickens scurried to get their share.

The photo below was made recently at the Jordan River Park north of the Sea of Galilee. 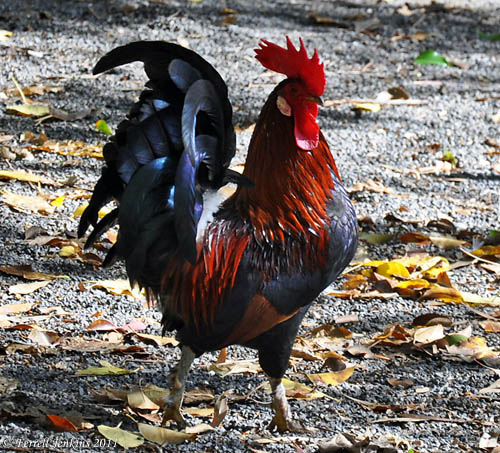 We especially remember the rooster in connection with Peter’s denial of the Lord. Note first the Lord’s prediction:

“I assure you,” Jesus said to him, “tonight, before the rooster crows, you will deny Me three times!” “Even if I have to die with You,” Peter told Him, “I will never deny You!” And all the disciples said the same thing. (Matthew 26:34-35 CSB)

Matthew records what happened after the denial:

Then he started to curse and to swear with an oath, “I do not know the man!” Immediately a rooster crowed, and Peter remembered the words Jesus had spoken, “Before the rooster crows, you will deny Me three times.” And he went outside and wept bitterly. (Matthew 26:74-75 CSB)

If you have visited St. Peter in Galicantu (St. Peter of the Cock Crowing) in Jerusalem recently, you have seen this sculpture showing Peter saying “I do not know Him.” Note the rooster on the top of the column. 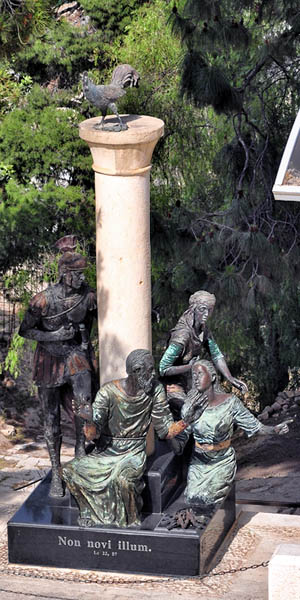 Sculpture at St. Peter in Galicantu. Photo by Ferrell Jenkins.

Then the Lord turned and looked at Peter. So Peter remembered the word of the Lord, how He had said to him, “Before the rooster crows today, you will deny Me three times.” And he went outside and wept bitterly. (Luke 22:61-62 CSB)