After David’s sin in the the matter of taking a census of the people of Israel, and his acknowledgment of the sin, he was told by Gad to build an altar (2 Samuel 24:1-10). The instructions are specific.

And Gad came that day to David and said to him, “Go up, raise an altar to the LORD on the threshing floor of Araunah the Jebusite.” So David went up at Gad’s word, as the LORD commanded. (2 Samuel 24:18-19 ESV)

Araunah was gracious in his offer to allow David to take any of his property needed — the oxen, the threshing sledge, and the yokes of the oxen for the wood. He said, “All this, O king, Araunah gives to the king.”

David’s reply is one of those memorable statements of Scripture.

But the king said to Araunah, “No, but I will buy it from you for a price. I will not offer burnt offerings to the LORD my God that cost me nothing.” So David bought the threshing floor and the oxen for fifty shekels of silver. (2 Samuel 24:24 ESV)

Artist Balage Balogh has provided us a beautiful illustration of the threshing floor of Araunah on what we later know to be Mount Moriah. See more of his work at Archaeology Illustrated.

It is generally understood that this is the place where Abraham came to offer Isaac, in the mount of the LORD three days from Beersheba  (Genesis 22:4, 14). It is where Solomon began to build the temple in 966 B.C.

Then Solomon began to build the house of the LORD in Jerusalem on Mount Moriah, where the LORD had appeared to David his father, at the place that David had appointed, on the threshing floor of Ornan the Jebusite. (2 Chronicles 3:1 ESV)

The temple was destroyed by the Babylonians in 586 B.C., but rebuilt under the leadership of Joshua and Zerubbabel after the return from Babylonian exile (520-516 B.C.). Herod the Great basically built a new temple during his reign.

The Romans destroyed Jerusalem, including the temple, in A.D. 70. Centuries later, between 687 and 691, the Qubbet es Sakhra, (Dome of the Rock) was built on the orders of the Ommayad caliph, Abd el Malik. The building has been restored numerous times, but “the monument has preserved its original majestic proportions and harmonious design” (The Middle East, Hachette, 1966). 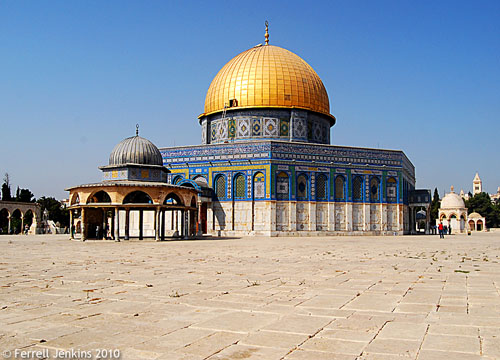 Dome of the Rock. Original site of Solomon's Temple. Photo by Ferrell Jenkins.

The association of this site with both Abraham and David ties together two of the great texts of the Old Testament (Genesis 12; 2 Samuel 7) and makes it especially significant for those who believe the Bible.

Like Loading...
This entry was posted in Bible Places, Bible Study, Israel, Old Testament and tagged Jerusalem. Bookmark the permalink.