Memorial Day, originally called Decoration Day, is a day of remembrance for those who have died in our nation’s service. There are many stories as to its actual beginnings, with over two dozen cities and towns laying claim to being the birthplace of Memorial Day. (Memorial Day History)

When I was a kid, growing up in the American South, the day we now call Memorial Day was called Decoration Day. Families went to the local cemeteries to clean up the grave sites of relatives and leave fresh flowers. If it was known that there were no family members left in the community, those graves also were cleaned. I don’t recall when I first began to hear, or think, that the day was intended to honor those fallen in war.

Like many holidays, the original purpose has changed. Memorial Day, Independence Day, Labor Day, Christmas, Easter, and other holidays, have become times for picnics, trips, vacations, and assorted non-related practices. Every holiday has become a time for stores to have sales.

I like the idea of Memorial Day. I am pleased to join in the remembrance of troops fallen in battle, and all of the dead who have played a significant role in my life. 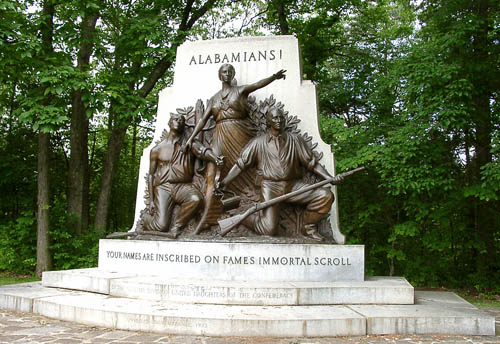 Honoring the Fallen from Alabama at Gettysburg. Photo by Ferrell Jenkins.

Our header today is a photo I made at Normandy a few years ago.

For Christians, every Lord’s Day is a special day of remembrance. We gather to remember the death of the Lord Jesus for our sins.

23 For I received from the Lord that which I also delivered to you, that the Lord Jesus in the night in which He was betrayed took bread;
24 and when He had given thanks, He broke it and said, “This is My body, which is for you; do this in remembrance of Me.”
25 In the same way He took the cup also after supper, saying, “This cup is the new covenant in My blood; do this, as often as you drink it, in remembrance of Me.”
26 For as often as you eat this bread and drink the cup, you proclaim the Lord’s death until He comes. (1 Corinthians 11:23-26 NAU)