In the last post about the aerial photos (January 18) we showed the mountains of Judea as we approached the central mountain ridge. Today’s photo shows the Old City of Jerusalem from about 3800 feet above sea level. The city itself is about 2400 to 2500 feet above (Mediterranean) sea level. The view is looking southeast across the Wilderness of Judea to the mountains of Moab in the Transjordan tableland. 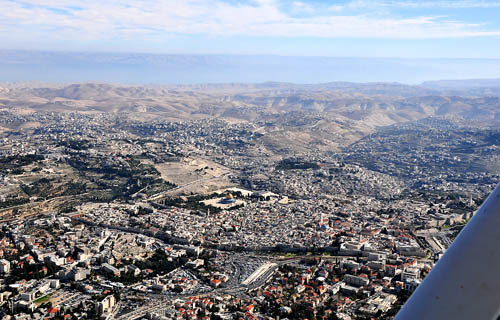 In this photo one can see the proximity of Jerusalem to the Wilderness of Judea. The distance from Jerusalem to the Dead Sea is not more than 20 miles. The elevation drops from about 2600 at the Mount of Olives to (currently) about 1384 feet below sea level at the surface of the Dead Sea. The Transjordan Tableland is about 3000 above sea level.

As the mountains surround Jerusalem, So the LORD surrounds His people From this time forth and forever. (Psalm 125:2 NAU)

5 responses to “Jerusalem at 3800 feet altitude”