Tirhakah of Sudan (or Ethiopia, or Cush)?

Our post yesterday reported the discovery of a large statue of Taharqa  (English Bible: Tirhakah) deep in Sudan. Some English versions associate Tirhakah with Ethiopia (NET, NKJV). Other associate him with Cush (NAU, ESV, CSB). The Hebrew word here is Kush (or Cush).

Kenneth A. Kitchen clarifies the terminology:

The region S of Egypt, i.e. Nubia or N Sudan, the ‘Ethiopia’ of classical writers (not modern Abyssinia [Ethiopia]). The name Cush in both Hebrew and Assyrian derives from Egyptian Kš (earlier K’s, K’š), ‘Kush’. Originally the name of a district somewhere between the second and third cataracts of the Nile c. 2000 bc, ‘Kush’ became also a general term for Nubia among the Egyptians, which wider use Hebrews, Assyrians and others took over (G. Posener, in Kush 6, 1958, pp. 39–68). (New Bible Dictionary, 3rd Ed.)

The Theological Wordbook of the Old Testament comments on the term Cush (Ethiopia) as it is used in several Old Testament prophecies.

About a year ago I visited a Nubian Village on the banks of the Nile River at the first cataract of the Nile at Aswan. The Nubians at the village originally lived south of Aswan in the ancient territory of Cush. When the new High Dam was built on the Nile the Nubians were moved to other settlements.

One of the interesting things I observed at the village was a shop of some sort called House of Kush (Cush). A sign on top of the building added “Welcome to Taharka Kingdom.” My point is to show the association between southern Egypt, Cush, and Tirhakah. 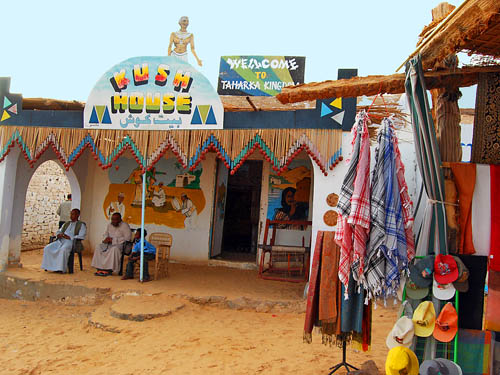