A simple Jewish residence from the first century has been unearthed in Nazareth, according to an announcement made by the Israel Antiquities Authority today. 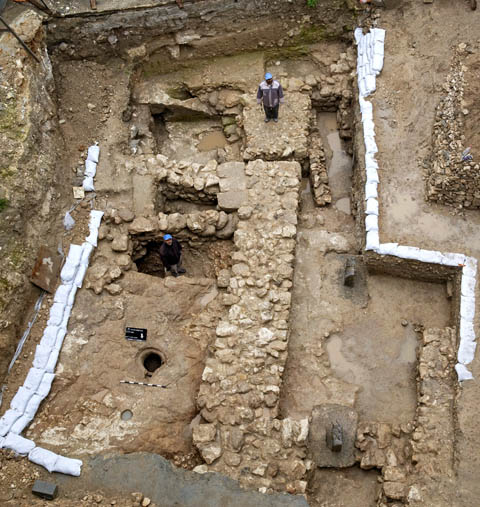 An archaeological excavation the Israel Antiquities Authority recently conducted has revealed new information about ancient Nazareth from the time of Jesus. Remains of a dwelling that date to the Early Roman period were discovered for the first time in an excavation, which was carried out prior to the construction of the “International Marian Center of Nazareth” by the the Association Mary of Nazareth, next to the Church of the Annunciation.

According to the New Testament, Mary, the mother of Jesus, lived in Nazareth together with her husband Joseph. It was there that she also received the revelation by the Angel Gabriel that she would conceive a child to be born the Son of God. The New Testament mentions that Jesus himself grew up in Nazareth.

In 1969 the Church of the Annunciation was erected in the spot that the Catholic faith identified with the house of Mary. It was built atop the remains of three earlier churches, the oldest of which is ascribed to the Byzantine period (the fourth century CE). In light of the plans to build there, the Israel Antiquities Authority recently undertook a small scale archaeological excavation close to the church, which resulted in the exposure of the structure.

According to Yardenna Alexandre, excavation director on behalf of the Israel Antiquities Authority, “The discovery is of the utmost importance since it reveals for the very first time a house from the Jewish village of Nazareth and thereby sheds light on the way of life at the time of Jesus. The building that we found is small and modest and it is most likely typical of the dwellings in Nazareth in that period. From the few written sources that there are, we know that in the first century CE Nazareth was a small Jewish village, located inside a valley. Until now a number of tombs from the time of Jesus were found in Nazareth; however, no settlement remains have been discovered that are attributed to this period”.

In the excavation a large broad wall that dates to the Mamluk period (the fifteenth century CE) was exposed that was constructed on top of and “utilized” the walls of an ancinet building. This earlier building consisted of two rooms and a courtyard in which there was a rock-hewn cistern into which the rainwater was conveyed. The artifacts recovered from inside the building were few and mostly included fragments of pottery vessels from the Early Roman period (the first and second centuries CE). In addition, several fragments of chalk vessels were found, which were only used by Jews in this period because such vessels were not susceptible to becoming ritually unclean.

Another hewn pit, whose entrance was apparently camouflaged, was excavated and a few pottery sherds from the Early Roman period were found inside it. The excavator, Yardenna Alexandre, said, “Based on other excavations that I conducted in other villages in the region, this pit was probably hewn as part of the preparations by the Jews to protect themselves during the Great Revolt against the Romans in 67 CE”. 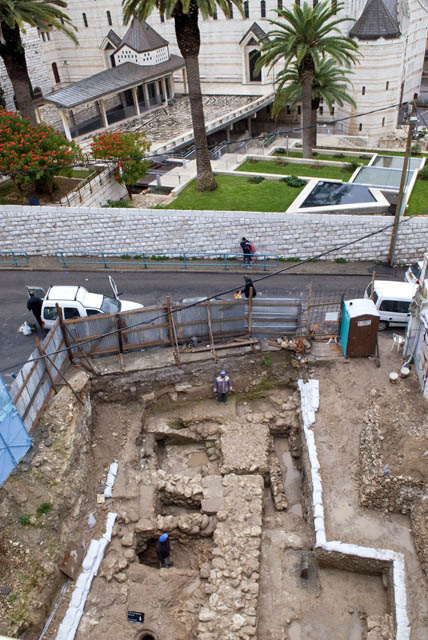 Excavation of Nazareth residence and Church of Annuciation. Photo: IAA.

Attempts to link this house to Joseph, Mary, and Jesus are unfounded at this time.

But when he heard that Archelaus was reigning over Judea in place of his father Herod, he was afraid to go there, and being warned in a dream he withdrew to the district of Galilee. And he went and lived in a city called Nazareth, that what was spoken by the prophets might be fulfilled: “He shall be called a Nazarene.” (Matthew 2:22-23 ESV)