A day in the Negev

Today we spent most of the time in the area of Israel known as the Negev (Negeb, or South). This area was home to Abraham (Genesis 12:9; 13:1) and Isaac (Genesis 24:62). Our first stop as we left the Dead Sea area was Arad (Numbers 21). We continued to Beersheba. This was the home of Abraham (Genesis 21-22). He dug a well and planted a Tamarisk tree here.

The excavation at Beersheba has been skillfully reconstructed to reveal the layout of the city. The photo shows the outer gate, the well, and a tamarisk tree.

Tamarisk Tree and Well at the Outer Gate of Beersheba. Photo by Ferrell Jenkins.

We devoted about 3 hours trying to locating Ziklag. The city is mentioned no less than 15 times in the Old Testament. One of the most significant references is in1 Samuel 27. Achish, king of Gath, gave Ziklag to David.

Then David said to Achish, “If I have found favor in your eyes, let a place be given me in one of the country towns, that I may dwell there. For why should your servant dwell in the royal city with you?” So that day Achish gave him Ziklag. Therefore Ziklag has belonged to the kings of Judah to this day. And the number of the days that David lived in the country of the Philistines was a year and four months. (1 Samuel 27:5-7 ESV)

Scholars are not certain about the identification of Ziklag. The site pictured here is known as Tel esh-Sharieh (Tel Sera in Hebrew) which is a possible candidate for Ziklag. This photo shows that Tel Sera is located in an agricultural area of the Negev. The Wadi Gerar lies on the south side of the tel, but the wadi is not visible in this photo because it is now below the present ground level of the field. 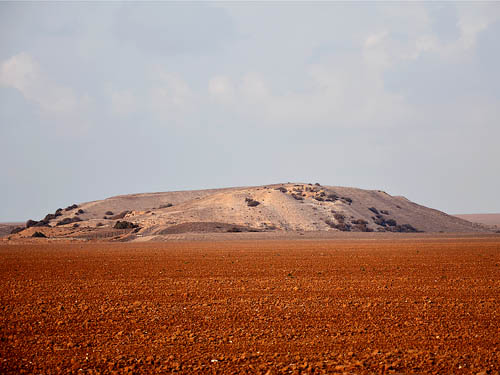 Instead of the typical dry water bed, Wadi Gerar is filled with reeds. At least this is true in the area around Ziklag.