Friday evening we stayed in the plain of Sharon with friends and former students. We had selected some sites north of there to visit today, but the weather forecast indicated that the weather would be bad. The forecast for the area around Tel Aviv looked better so we went to Caesarea Maritima. When we arrived there was some sun. I noticed the waves were much higher than I had ever seen and those crashing into the breakwater splashed high into the air.

The first photo shows the site of the Herodian harbor. I rented a wide angle lens for this trip to be able to make photos of this type. 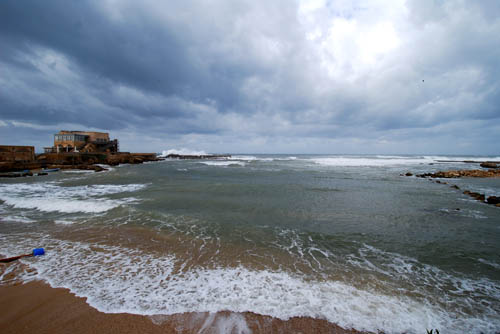 Look carefully at the breakwater to the right of the building on the left of the photo. You will see the splash of the waves high above the breakwater. The next photo shows a closeup of the same area. The splash appear to almost touch the clouds. 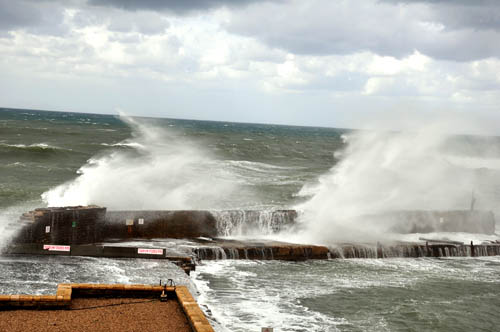 High waves splashing against the breakwater. Photo by Ferrell Jenkins.

Herod the Great built a city on the site of Strato’s Tower and named it Caesarea in honor of Caesar Augustus. It became a center of Roman provincial government in Judea. The city had a harbor and was located on the main caravan route between Tyre and Egypt. This city is called Caesarea Maritima (on the sea) to distinguish it from Caesarea Philippi.

The Apostle Paul used the harbor at Caesarea several times. He was imprisoned here for two years before departing for Rome (Acts 24:27; 27:1).