We spent two days at Tiberias on the Sea of Galilee at a lovely smaller hotel called Ron Beach Hotel. I had stayed there once before and wanted to return. It is family owned and operated. The staff is friendly and the meals are good. The hotel is situated on the north side of Tiberias as you head toward Magdala and Tabgha.

Thursday morning heavy clouds covered the Sea of Galilee. Only occasionally the sun broke through to provide a glimmer across the water. We went to a few places where we could make photos on the shore of Galilee. We visited the Church of the Primacy. This is the traditional site where Jesus met with the disciples after the resurrection. The events are recorded in John 21. The disciples had fished during the night and caught nothing. At day break Jesus invited them to “Come and have breakfast.”

We also visited Hazor and Kedesh. In the late afternoon we went to Mount Arbel for a magnificent view of the northern portion of the Sea of Galilee. We were a little late. The photo you see below was made in the dark with a long exposure and the use of a tripod. The land below is known in the New Testament as the Land of Gennesaret.

And when they had crossed over, they came to land at Gennesaret. (Matthew 14:34) 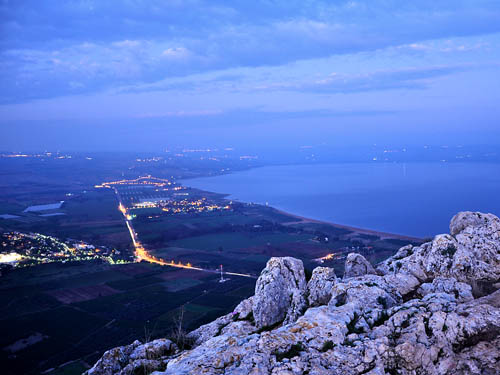 The Sea of Galilee from Mount Arbel at night. Photo by Ferrell Jenkins.

When we mentioned rain to the locals, they spoke of how badly they needed rain. There was evidence of rain in several of the places we visited. Due to drought conditions the Sea of Galilee is extremely low. This sea level indicator at Tiberias shows the level to be 214.31 meters below sea level. That is 703.12 feet. 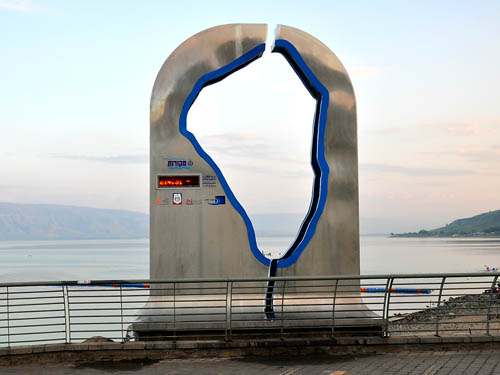 The Israel Ministry of Environmental Protection has determined if the Sea of Galilee drops below 214.87 meters [704.95 feet] below sea level “the pumps in the lake can no longer operate.”

The risks associated with reduced water levels are formidable: ecosystem instability and deterioration of water quality, damage to nature and landscape assets, receding shorelines and adverse impacts on tourism and recreation. When the black line is reached, the pumps in the lake can no longer operate.

According to the Water Authority, Lake Kinneret lost 5.13 meters [16.83 feet] since the spring of 2004, equivalent to some 850 million cubic meters of water.

Everywhere around the lake one can see evidence that the water level is low. 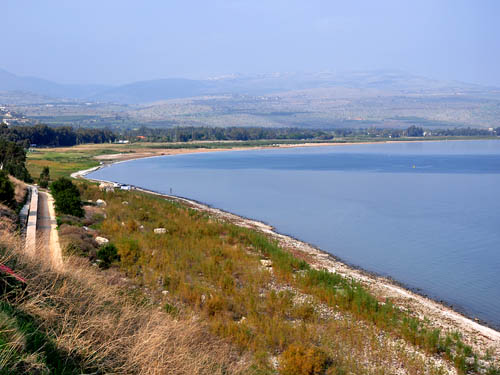 The NW area of the Sea of Galilee. Photo by Ferrell Jenkins.

Water once covered the area where you see grass. You may know that there are brackish springs at Taghba. This water is channeled around the sea to the Jordan River, so the sea remains fresh water. The concrete channel may be seen in the left of the picture.

Perhaps tomorrow I will have time to tell you about the little storm we saw on the sea this morning.