More on the Magdala Excavation Project 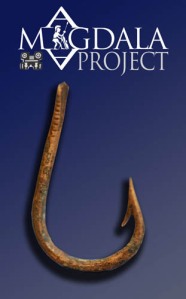 Fish-hook from the 2008 Magdala Project dig.

The Magdala Project blog is giving some info on the current excavations at the site of Magdala on the west short of the Sea of Galilee. Reports include information on the first century synagogue, a 2006 preliminary report, and ship iconography as portrayed on mosaics of the first to third centuries AD.

Several nice photos are included on the blog including one of a fish-hook discovered  from the 2008 Magdala Project dig, and a stone anchor from the 2007 season.

The article by K. C. Hanson on “The Galilean Fishing Economy and the Jesus Tradition” is extremely helpful for those seeking to understand the role of the disciples of Jesus who were fishermen.

The photo of the fish-hook  provides a nice illustration of a text from Matthew 17:24-27.

When they came to Capernaum, the collectors of the two-drachma tax went up to Peter and said, “Does your teacher not pay the tax?” He said, “Yes.” And when he came into the house, Jesus spoke to him first, saying, “What do you think, Simon? From whom do kings of the earth take toll or tax? From their sons or from others?” And when he said, “From others,” Jesus said to him, “Then the sons are free. However, not to give offense to them, go to the sea and cast a hook and take the first fish that comes up, and when you open its mouth you will find a shekel. Take that and give it to them for me and for yourself.” (Matthew 17:24-27 ESV)

We have mentioned Magdala several times. Check here, and use the Search box for other references.

Like Loading...
This entry was posted in Archaeology, Bible Places, Bible Study, Israel, New Testament and tagged Ministry of Jesus. Bookmark the permalink.

One response to “More on the Magdala Excavation Project”