Upon the untimely death of Zwingli, Heinrich Bullinger (A.D. 1504- 1575)  became pastor of the Gossmunster in Zurich. He is not as well known as other leaders of the early Reformation, but was a significant thinker and writer.  This statue of Bullinger is attached on the wall of the Grossmunster to the right of the entry. 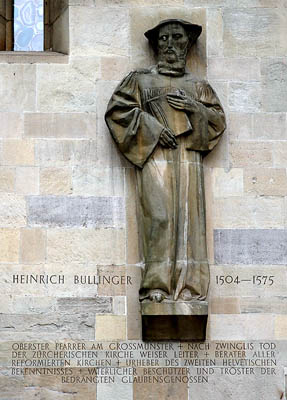 In the days of Zwingli the altars and images were removed from the Grossmunster in Zurich. The interior of the building has been restored to its orignal Romanesque appearance.

Interior of the Grossmunster in Zurich. Photo by Ferrell Jenkins.

Take a look at Sacred Destinations if you would like to see some more information about the Grossmunster and good photos of sites in Zurich.

Like Loading...
This entry was posted in Church History, Travel and tagged Reformation Movement, Switzerland. Bookmark the permalink.

One response to “Heinrich Bullinger, successor to Zwingli”