We arrived on time this morning after an all night flight from Atlanta to Zurich. As soon as we got out luggage, with three or four bags missing, we went to downtown Zurich to visit the statue of Ulrich Zwingli at the Wasserkirche (Water Church), the Grossmünster (the great cathedral where Zwingli preached in the early 15th century), and a few other sites in the downtown area of the city.

After our guide presented some of the history of the political and religious conditions in Switzerland in the early 15th century, I took the opportunity to talk about the work and beliefs of Zwingli as an early leader of the Reformation Movement. More in a later post. 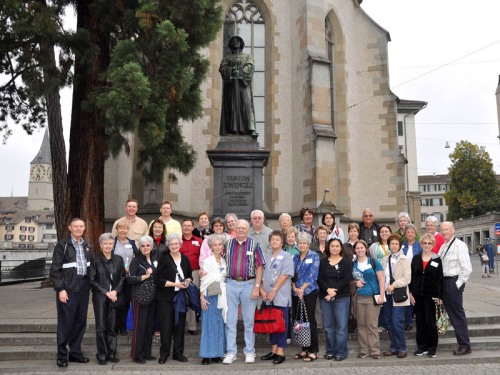 Ferrell Jenkins Tour Group at the Zwingli Statue in Zurich.

The steps there seemed like a good place to line up the group for a photo. If you think you know someone in the group you may click on the photo for a larger image. This wasn’t our “official” tour photo with banner, etc., and some of the ladies didn’t much like the idea of the photo being posted. I think they look nice after being up all night. How about you?

Like Loading...
This entry was posted in Church History, Photography, Travel and tagged Reformation Movement, Zwingli. Bookmark the permalink.