The Way of the Cross – Via Dolorosa

Numerous events from the last day prior to the crucifixion of Jesus are recorded in the New Testament (Matthew 26-27; Mark 14-15; Luke 22-23; John 18-19). As early as Byzantine times Christians began to follow the final steps of Jesus on specified days. Over the centuries many changes were made in the route and the stops. The traditional Via Dolorosa, as known today, was fixed in the 18th century.

The Via Dolorosa is defined by faith, not by history. (The Holy Land, 5th edition, 37)

According to tradition, the third station of the cross is where Jesus falls the first time under His cross. It sounds reasonable, but the Gospels make no specific mention of this. 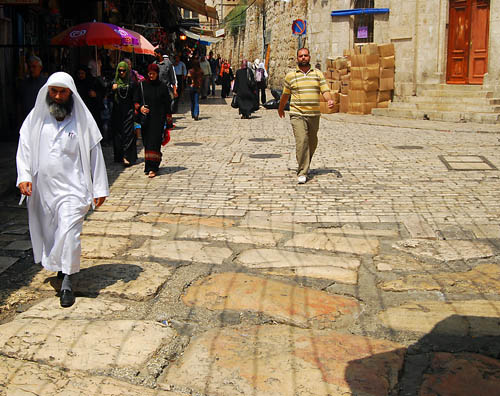 Roman period street near 3rd station of the cross. Photo by F. Jenkins.

This photo shows the street in front of the third station. The plaque in Hebrew, Arabic and English provides the following information about the street.

Paving stones, apparently from the Second Temple Period (ca. 100 B.C.C. – 100 C.E.). The street was found in its entirety 3 meters below the existing level and was partially restored by the Municipality of Jerusalem … 1980-1981.

This means that the street Jesus might have walked is at least 10 feet below the present street level.