The monastery of the Gerasene swine

Stephen G. Rosenberg, senior fellow of the W. F. Albright Institute of Archeological Research in Jerusalem, has an article about the monastery of the Gerasene swine in The Jerusalem Post here. Take a look.

This site, located on a hill above the eastern shore of the Sea of Galilee, marks the traditional site of the miracle of the swine running down the steep cliff into the sea.

When He came to the other side into the country of the Gadarenes, two men who were demon-possessed met Him as they were coming out of the tombs. They were so extremely violent that no one could pass by that way. And they cried out, saying, “What business do we have with each other, Son of God? Have You come here to torment us before the time?” Now there was a herd of many swine feeding at a distance from them. The demons began to entreat Him, saying, “If You are going to cast us out, send us into the herd of swine.” And He said to them, “Go!” And they came out and went into the swine, and the whole herd rushed down the steep bank into the sea and perished in the waters. The herdsmen ran away, and went to the city and reported everything, including what had happened to the demoniacs. And behold, the whole city came out to meet Jesus; and when they saw Him, they implored Him to leave their region. (Matthew 8:28-34 NAS)

The article by Rosenberg points out that this would have been the land of Geshur in Old Testament times. David was married to Maacah, “the daughter of Talmai, king of Geshur” (2 Samuel 3:3). Maacah was the mother of Absalom. The Bible points out that Absalom spent three years in exile after killing Amnon.

Geshur is well-known from the Bible. King David married Maacah, the princess of Geshur, in the early years of his reign. That will have been for political reasons, to ensure a security pact with Geshur, which could shield David from the power of Aram (Syria) to the north, but this lady must have been powerfully beautiful as well. Her two children by David, Tamar and Absalom, are both described as being unusually good-looking. Tamar was “beautiful” and as for Absalom, “there was none in Israel to be so much praised for his beauty.”

Remember that the excavators of et-Tell like to identify it as Old Testament Geshur and New Testament Bethsaida. The sites are not far apart and both belonged in the general region of Geshur.

This photo of the basilica, made of black basalt with white limestone columns, was made last August. This site provides a wonderful view west across the Sea of Galilee. 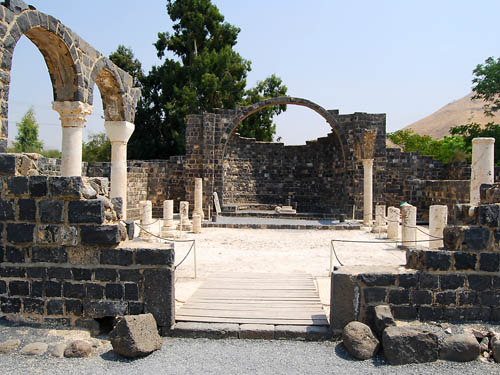 The basilica at Kursi. Photo by Ferrell Jenkins.

Murphy-O’Connor says this has been a place of pilgrimage since the fifth century A.D. He suggests the name of the place, Kursi, “is possibly a dialectical deformation” of Chorazin. (The Holy Land).