Rainbow over the Dead Sea

My friend Leon Mauldin is in Israel. He sent me a nice photo in which he captured a rainbow over the Dead Sea. I publish it here with his permission. This view looks east toward the Transjordan tableland. You can’t see the mountains because of the heavy clouds. To the far right of the photo you will see a glimmer of light on the surface of the Dead Sea. 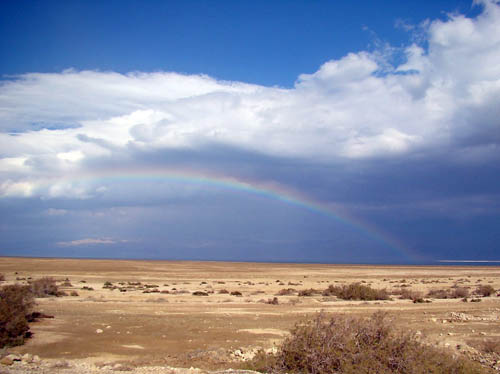 Rainbow over the Dead Sea. Photo by Leon Mauldin.

The land in the foreground of the photo was covered by the water of the Dead Sea just forty years ago. With less water flowing into the Dead Sea the level has been declining over the past few decades.

The name Dead Sea is not used in the Bible. Rather, this body of water is called the Sea of the Arabah, the Salt Sea, or the Eastern Sea. The Bible describes the territory of the Transjordan tribes, Reuben and Gad, this way:

The Arabah and the Jordan River were also a border, from the sea of Chinnereth to the sea of the Arabah (that is, the Salt Sea), beneath the watershed of Pisgah to the east. (Deuteronomy 3:17).