The Story of Sinuhe – an Egyptian traveler

The earliest description of Canaan comes from an Egyptian literary text. In The Story of Sinuhe (see-NUU-hay) written in the 20th century B.C., a traveler tells of his pleasant stay in northern Canaan (possibly the Beka Valley of Lebanon). He describes the land as follows:

Figs were in it, and grapes. It had more wine than water. Plentiful was its honey, abundant its olives. Every (kind of) fruit was on its trees. Barley was there, and emmer. There was no limit to any (kind of) cattle. (qtd. in Pritchard, Ancient Near Eastern Texts, 19)

This description reminds one of the promise God made to the Israelites to bring them into a land flowing with milk and honey (Exodus 3:8). A copy of The Story of Sinuhe written on stone is on display in the Ashmolean Museum, Oxford, England. The stone below, now in the British Museum, contains the final stanza of the Story or Tale.

The Tale of Sinuhe in the British Museum. Photo by Ferrell Jenkins.

The photo of grapes from Lachish reminds us of the abundance of the land through which Sinuhe traveled. 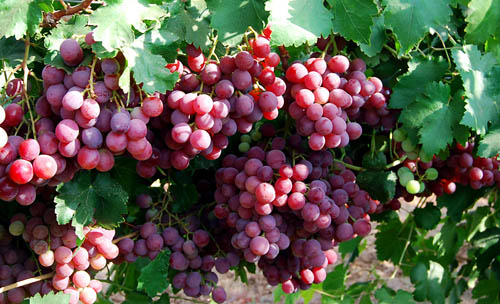 Grapes on the vine near Lachish. Photo by Ferrell Jenkins.