Reeds, Rushes, or Bulrushes along the Nile

One of the best known stories of the Bible is the account of the mother of Moses hiding the baby among the reeds, rushes, or bulrushes along the edge of the Nile. The terms mentioned above are used interchangeably in various English Bible versions.

Read the full account in Exodus 21. Here are the first few verses.

A man from the household of Levi married a woman who was a descendant of Levi.  The woman became pregnant and gave birth to a son. When she saw that he was a healthy child, she hid him for three months.  But when she was no longer able to hide him, she took a papyrus basket for him and sealed it with bitumen and pitch. She put the child in it and set it among the reeds along the edge of the Nile.  (Exodus 21:1-3 NET Bible)

In the past few days we traveled on the Nile River and saw many examples of the reeds or rushes along the banks of the River.

Reeds or rushes along the edge of the Nile River. Photo by Ferrell Jenkins.

Frequently the Bible records the statements of various foreign rulers. One such record is that of the Assyrian king Sennacherib.

When he heard them say concerning Tirhakah king of Cush, “Behold, he has come out to fight against you,” he sent messengers again to Hezekiah saying,  “Thus you shall say to Hezekiah king of Judah, ‘Do not let your God in whom you trust deceive you saying, “Jerusalem will not be given into the hand of the king of Assyria.”  (2 Kings 19:9-10)

The Theological Wordbook of the Old Testament comments on the term Cush (Ethiopia) as it is used in several Old Testament prophecies.

Tirhakah under the protection of the god Amun. British Museum photo by Ferrell Jenkins.

This colossal statue shows Tirhakah standing under the protection of the god Amun shown as a recumbent ram. The gray granite sculpture, dating to about 675 B.C., was found at Karnak. This granite is typical of the Aswan area.

Yesterday afternoon we visited a Nubian Village on the banks of the Nile River at the first cataract of the Nile at Aswan. The Nubians at the village originally lived south of Aswan in the ancient territory of Cush. When the new High Dam was built on the Nile the Nubians were moved to other settlements.

One of the interesting things I observed at the village was a shop of some sort called House of Kush (Cush). A sign on top of the building added “Welcome to Taharka Kingdom.”

This photo is especially for Mrs. Caldwell’s class at the Florida College Academy. I hope you are enjoying the photos of Egypt.

Visiting the Valley of the Kings

The Valley of the Kings is located on the West Bank of the Nile River a short distance from the Nile valley. 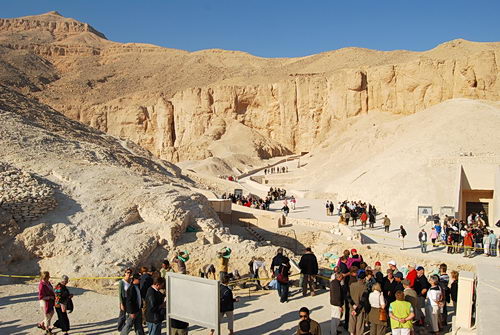 The Valley of the Kings. Photo by Ferrell Jenkins.

New archaeological excavations continue in the Valley of the Kings. It was fascinating to see workers carrying buckets filled with debris. This is reminiscent of old photos of workers in Mesopotamia or Palestine in the early nineteenth century. Beginning with the excavation of Masada by Yigal Yadin, volunteers are used. Students often pay their own transportation, room and board, to work on a dig. It is a form of educational slavery, one might say.

Workers at archaeological site in the Valley of the Kings. Photo by Ferrell Jenkins.

Some archaeologists were busy surveying. Others were photographing small items. I saw four individuals washing and restoring broken pottery.

Pottery reconstruction in the Valley of the Kings. Photo by Ferrell Jenkins.

Travel can be exciting and educational.