More about the Cherubim

To the illustration from Byblos included with W. F. Albright’s article I would like to add a few photographic illustrations that might be helpful in understanding the concept of the Cherub as well as the general concept of composite beasts in the Apocalyptic books of Ezekiel, Daniel,  Zechariah, and Revelation.

Throne of King Idrimi of Alalakh. Photo by F. Jenkins.

The photo above shows the front of the Statue of King Idrimi of Alalakh, now displayed in the British Museum. An associated cuneiform inscription tells that this king, following a popular revolt, was forced into exile. He went first to Emar on the Euphrates, then to Canaan, where he joined other refugees from Syria and lived with the Hapiru. Seven years later he recaptured the district of Mukish and was acclaimed king of Alalakh.

The drawing on the left (above) shows the suggested reconstruction of the throne of King Idrimi of Alalakh (1570-1500 BC) . Alalakh is located in North Syria, near the Orontes River. Due to political changes, Alalakh, Tell Atshana [Açana], is now in southern Turkey. See The New International Dictionary of Biblical Archaeology or The Biblical World for more information about the excavations at Alalakh.

This photo on the right (above) shows the right side of the statue as it is displayed in the British Museum. 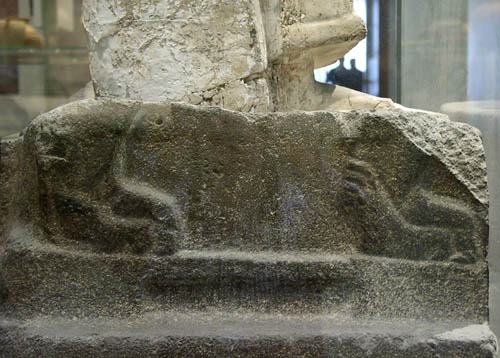 Right side base of throne of the King of Alalakh.

The photo above shows the base of the right side of the statue. The front and hind feet of the “creature” upon which the throne stands are clearly visible.

Left side of the throne.

The photo to the right shows the left side of the throne. The front and hind legs of the animal can be seen.

Recall these references from the Bible describing the LORD as riding on a cherub.

These are the living beings that I saw beneath the God of Israel by the river Chebar; so I knew that they were cherubim. (Ezekiel 10:20; see entire chapter)

We are saying that images such as the one discussed here provide an idea of the imagery involved in the biblical description of the cherubim.

Perhaps later we will be able to include some photos of representations of the cherubim upon the ark of the covenant.