A Judean seal in Assyrian style

There is so much archaeological work going on in Jerusalem today that we are not surprised about the announcement of another seal discovery.

An excavation at the Western Wall plaza has uncovered a seal in a building belonging to the seventh century B.C. This is the time when Manasseh, Amon, and Josiah ruled over the House of David in Jerusalem (2 Kings 20:21 – 2 Kings 21).

The seal is made of black stone and shows the image of an archer shooting a bow and arrow. The name in ancient Hebrew script reads LHGB (meaning for Hagab). Perhaps the most interesting thing about the seal is that it is decorated in Assyrian style. Here is what the Israel Antiquities Authority press release says about it.

The seal was sent for expert evaluation to Professor Benjamin Sass of the Tel Aviv University and Dr. Tali Ornan of the Hebrew University of Jerusalem. According to them the image of the archer was influenced by Assyrian wall reliefs in which archers are portrayed shooting bows and arrows – such as those that are known from the Lachish relief. The image of the archer appears in profile: he is standing in a firing position with his right foot in front of his left. His face is portrayed schematically but his body, his dress and especially the muscles of his arms and legs stand out prominently. He is barefoot. His attire includes a headband and a skirt that is wrapped around his hips. A quiver hangs from his back and its straps are drawn tightly across his exposed chest. He is holding a bow and arrow in his hands. His right hand is extended forward holding the bow while his left is pulled back grasping the arrow. The seal is quite unique since this is the first time that a private seal has been discovered that bears a Hebrew name and is decorated in the Assyrian style. The seal attests to the strong Assyrian influence that existed in Jerusalem in the seventh century BCE. It is usually assumed that the owner of private seals were individuals who held government positions. We can suggest that the owner of the seal – Hagab, who chose to portray himself as a Hebrew archer depicted in the Assyrian style – served in a senior military role in Judah.

The name Hagab is found among the list of Judean exiles who returned from Babylon to Jerusalem and Judah in 536 B.C. (Ezra. 2:46). The text says that his sons returned. We have no way of knowing whether there is any connection between the Hagab named in the Bible and the one named on the seal. The actual size of the seal is .04 inches by .55 inches. 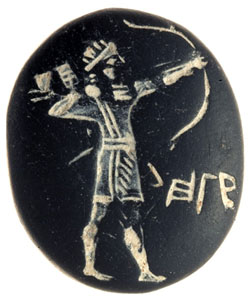 The photo below is one I made in the British Museum of the reliefs showing the siege of Lachish by the Assyrian King Sennacherib. It shows Assyrian archers behind shields with bows drawn and arrows ready to fly. This gives you an opportunity to see how the image on the seal compares with known images of Assyrian archers. 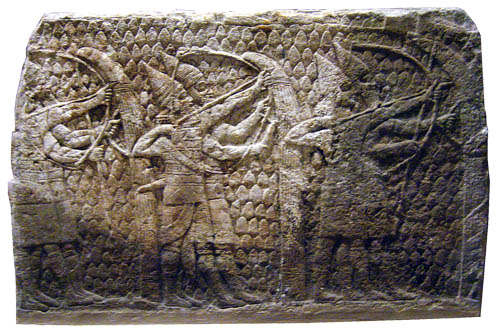 David used the figure of the archers metaphorically to describe the wicked.

For, behold, the wicked bend the bow, They make ready their arrow upon the string To shoot in darkness at the upright in heart. (Psalm 11:2)