The Sower Went Out to Sow…

One of the best known parables of Jesus is the parable of the sower and the soils. Note the account recorded in Luke.

“The sower went out to sow his seed; and as he sowed, some fell beside the road, and it was trampled under foot and the birds of the air ate it up. “Other seed fell on rocky soil, and as soon as it grew up, it withered away, because it had no moisture. “Other seed fell among the thorns; and the thorns grew up with it and choked it out. “Other seed fell into the good soil, and grew up, and produced a crop a hundred times as great.” As He said these things, He would call out, “He who has ears to hear, let him hear.”  (Luke 8:5-8 NASB)

Jesus used this simple, easily understood illustration to teach about the word of God and the hearts of men. Read the full account in Luke 8:5-15, Matthew 13:3-23, and Mark 4:1-20.

A few weeks ago I was traveling in the vicinity of Hebron and saw these fields that had been plowed and readied for planting. I would assume the crop would be barley or wheat. I was standing on the road. You can see the rocks (be sure the soil is rocky), the weeds (if not thorns), and the good ground. In the time of Jesus seed would be broadcast, scattered by hand. Seed would fall on all the areas, but only that which fell on good ground would bring forth an acceptable crop. Many of the fields in the central mountain range north of Bethlehem are much smaller, but each field has the four elements of good soil, rocks, thorns, and road. How would you describe your heart? 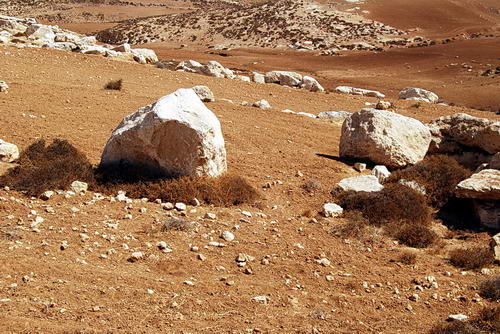