As the term implies, Old Cairo is the oldest section of Cairo, Egypt. It is sometimes called Coptic Cairo. Visitors may see the Coptic Museum where some of the Nag Hammadi Gnostic texts are displayed. The last time I was in Cairo, in 2005, the museum was closed for some restoration. I am hopeful this will not be the case the next time.

The Church of St. Sergius is located in the Coptic area. Legend has it that Joseph, Mary, and the infant Jesus stayed here when they fled from Herod the Great. The New Testament records all we really know about their stay in Egypt.

Now when they had departed, behold, an angel of the Lord appeared to Joseph in a dream and said, “Rise, take the child and his mother, and flee to Egypt, and remain there until I tell you, for Herod is about to search for the child, to destroy him.” And he rose and took the child and his mother by night and departed to Egypt and remained there until the death of Herod. This was to fulfill what the Lord had spoken by the prophet, “Out of Egypt I called my son.” (Matthew 2:13-15 ESV)

The Romans built a fortress in the area of Old Cairo called Babylon. Some remnants of the fortress can be seen.

Of special interest is the Ben Ezra Synagogue. It was here that the 140,000 Cairo Geniza fragments of Hebrew and Jewish literature were found. The collection of material dating back to as early as the 9th and 10th century A.D. is now housed in Cambridge, England. This link will take you to some good information about the collection. Until the discovery of the Dead Sea Scrolls these biblical fragments represented our oldest examples of the Hebrew biblical text.

This photo shows the interior of the restored Synagogue. Of course, few Jews live in Egypt now. 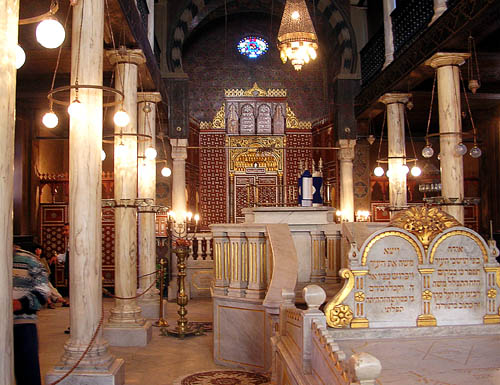