On July 4, 1980, I was participating in the excavation at Tel Lachish in Israel along with three of my colleagues from Florida College (James Hodges, Phil Roberts, and Harold Tabor). There were sizable numbers of participants from Israel, United States, Australia, South Africa, and Germany. In addition to the hard work out in the sun, we had some fun. On the morning of July 4th a few of the guys got an American flag and put together a drum and bugle corp and marched across the tel. Note especially the plastic bucket being used as a drum in this photo. 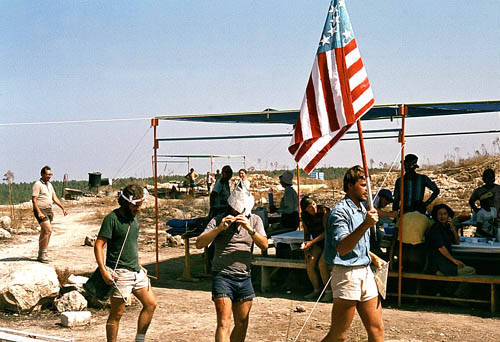 Lachish is identified with Tell ed-Duweir, located in the shephelah (lowlands) of Judah about 30 miles south west of Jerusalem. It is mentioned in Scripture during the period of the conquest (Joshua 10, 12, 15). Lachish served as one of the Judean store cities during the period of the kingdom Judah. Many of the LMLK jar handles have been found here. The city fell both to the Assyrians and the Babylonians.

Excavations were carried out by the British between 1932 and 1938 under the direction of J. L. Starkey. Starkey was murdered in 1938 while en route to the opening of the Palestine Archaeological Museum (later the Rockefeller Museum) in Jerusalem. Professor Yohanan Aharoni of Tel Aviv University excavated the “Solar Shrine” in 1966 and 1968. A new excavation was begun in 1973 under the auspices of The Institute of Archaeology of Tel Aviv University and The Israel Exploration Society. Dr. David Ussishkin served as the director until 1994.

One afternoon while we were in our tented camp a short distance from the tel, a bus load of Arabs from Jordan arrived. They had once lived in the area, prior to the founding of the State of Israel. Some of the older men had worked with Starkey. This photo which I took shows four of the Arab men and three of the Israeli archaeologists, along with one American. See if you recognize Gabriel Barkay, Richard Whitaker, Adam Zertal, and David Ussishkin. 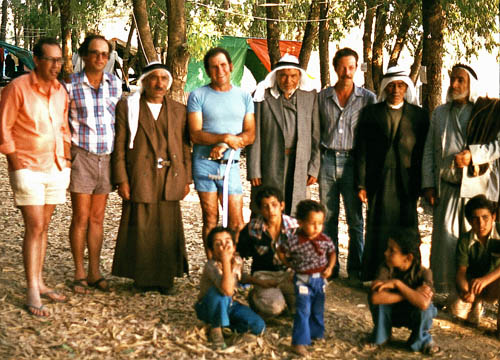 The Arab men enjoyed seeing the old photos from the Starkey excavations and pointing out themselves as much younger men. I think you will see Ussishkin’s head to the left of the Arab, and Barkay on the right. 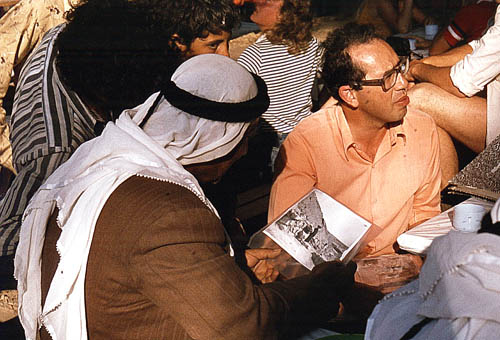 I thought you might enjoy this little bit of recent history from 28 years ago.

Update (July 6, 2008). Todd Bolen, at BiblePlaces.com has commented on this blog under the title Reminiscences of Lachish. He says he heard Gabriel Barkay tell about this event, but he includes some additional information that I did not know, including the name of the village where the Arabs previously lived.

The town of Qubeibe was leveled by the Israeli military in the 1960s and the stones of the village, probably many taken from the ruins of Lachish, were sold to building contractors.  Who knows but some ancient inscription was unknowing transferred from Lachish to Qubeibe and is now part of a wall in the area?

I recall that Richard Whitaker was the one best able to converse in Arabic.