This photo was made from inside the gate at Lachish looking west toward the Mediterranean Sea. The city faced two significant sunsets. It fell to the Babylonians in 587 B.C. The Lachish Letters were found immediately outside this gate in a room on the left. My friend and colleague, the late Phil Roberts, worked in the gate when we were at Lachish in 1980. Phil continued to work there each year until the excavation came to a close. When the prophet Jeremiah wrote, only Lachish and Azekah remained of the fortified cities of Judah (Jeremiah 34:7). 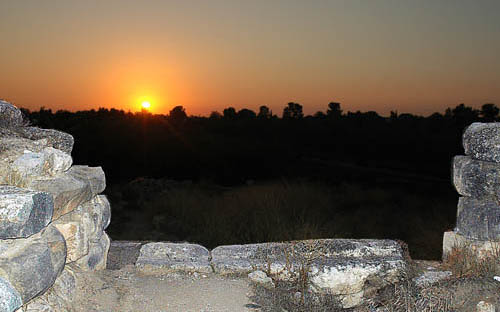 Lachish fell to the Assyrians more than a hundred years earlier in 701 B.C.The Bible records the events after the fall of Samaria this way,

Sennacherib was unable to capture Jerusalem. I take it that the destruction of Lachish was his greatest achievement because he plastered the walls of his palace in Nineveh. This photo shows the king receiving the surrender of Lachish.

The cuneiform inscription reads as follows:

Sennacherib, king of the world, king of Assyria, sat upon a (nîmedu) -throne and passed in review the booty (taken) from Lachish (La-ki-su). (ANET 288).