Without water it is impossible for men to survive. Many disputes throughout history have been about water and water rights. The importance of water during the time of the the biblical patriarchs is prominent in several Bible accounts.

The well was so important that the wise man used it as a euphemism to teach sexual purity.

At Petra in Jordan, men dressed in antique costumes demonstrate life among the Bedouin. Here we have a man at the well. This may seem ancient to younger people, but I drew water from a well when I was a youngster (and it was not in the patriarchal period!). 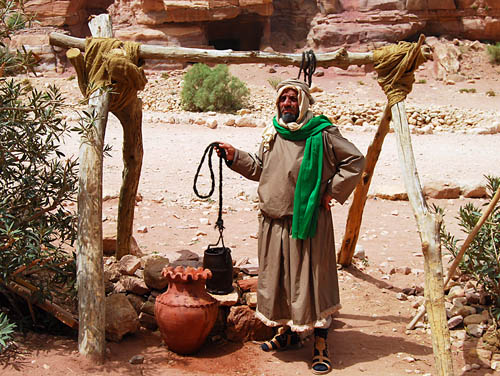 While working in my study this morning I noted that the news media is giving much attention to the visit of Benedict XVI to the USA. It is difficult to tell if the head of the Roman Catholic Church is the head of a political state or a spiritual leader.

I was surprised to hear that the jet that the pope flies on is called Shepherd One. Makes me wonder. If Jesus got a jet what would it be called. Maybe Servant One.

Peter is the supposed first pope according to Catholic theology. This is a claim not sustained by the Bible. Peter claimed to be a fellow shepherd, but that Jesus is the chief shepherd.

Therefore, I exhort the elders among you, as your fellow elder and witness of the sufferings of Christ, and a partaker also of the glory that is to be revealed, shepherd the flock of God among you, exercising oversight not under compulsion, but voluntarily, according to the will of God; and not for sordid gain, but with eagerness; nor yet as lording it over those allotted to your charge, but proving to be examples to the flock. And when the Chief Shepherd appears, you will receive the unfading crown of glory. (1 Peter 5:1-4)

The photo below, taken at the Nazareth Village, shows a shepherd tending his flock.

Home safely, and on time

I am thankful to report that I arrived home safely last evening from Amman, Jordan. Every flight was on time, and the flights from Amman and Frankfurt had a few seat available; there was no one sitting next to me. What a joy!

Lots to do to catch up. Uploads to WordPress are working correctly from my home computer, so I am posting this composite panorama of the site of ancient Jericho. The view is toward the east. The mountains of transjordan can be seen to the left of the tell. I hope to have more photos and information to share in the days to come.

Visting the land of Moab

Today we visited Heshbon, Tell Al, Dibon, and Macherus. Tell Al is thought to be the biblical site of Elealeh, a site always mentioned (Numbers 32:3). Macherus is the site of a fortress built by Herod the Great overlooking the Dead Sea on the east side. It is sort of a companion site to Masada on the western side of the sea. According to Josephus this is where John the Baptist was put to death by the order of Herod Antipas.

As a photo for today I want to share a picture I made at Heshbon in the ancient land of Moab. When we arrived the shepherd was beginning to lead his sheep out to pasture. Note the large number of lambs among the flock. Another interesting observation is that the shepherd is behind the flock. This is a something we see often in this part of the world. 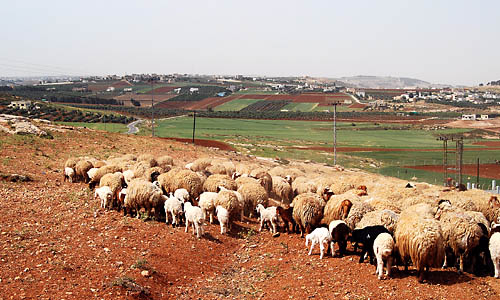 The LORD used this illustration many times to show His ooncern for His people. His appointed leaders were likened to shephers who would lead the flock. The text below speaks of the appointment of Joshua to take the place of Moses.

“May the LORD, the God of the spirits of all flesh, appoint a man over the congregation, who will go out and come in before them, and who will lead them out and bring them in, so that the congregation of the LORD will not be like sheep which have no shepherd.” (Numbers 27:16-17)

This will likely be the last post of the current trip until I am back in the comfort of my study. Prayers of the faithful are always appreciated.

Intermediate stop for Jacob and his family

Yesterday we were disappointed that we could not locate the road to the tell (Tell Dhahab west) that is thought (by some at least) to be the site of Penuel. Not wishing to be defeated, this morning I contacted the Department of Antiquities and inquired about how to reach the site from Deir Allah. I was given the mobile (cell in the USA) number for the Inspector for the area. When I called he said he would be delighted to assist.

When we arrived at Deir Allah (likely the site of biblical Succoth), we went to the Inspector’s office and visited a while. After tea, he went with us to the sites. Some of the road was very difficult, but we followed his pickup and made it in our rental car. This site is a few miles east of the Plains of the Jordan.

The photo above shows Tell Dhahab (West) on the left. I put a white dot on the impressive tell. You can see the Jabbok River below on the right. It was in terrain like this where Jacob crossed the Jabbok after wrestling with an angel.

So Jacob named the place Peniel, for he said, “I have seen God face to face, yet my life has been preserved.” Now the sun rose upon him just as he crossed over Penuel, and he was limping on his thigh. (Genesis 32:30-31)

Jeroboam fortified Penuel at the beginning of his reign as king of the northern kingdom of Israel (shortly after 931 B.C.).

Then Jeroboam built Shechem in the hill country of Ephraim, and lived there. And he went out from there and built Penuel. (1 Kings 12:25).

For one who loves traveling in the land of the Bible as much as I do, this was an exciting day. Maybe even better than finding the Roman road north of Tarsus last summer. The bus could not have made it to this place.

A day in Perea (Jordan Valley)

Yesterday we spent a large part of the day in the Jordan Valley. This area was called Perea by the Romans. We typically divide the ministry of Jesus into the Early Judean, Galilean, Perean, and Later Judean. You probably will not find the word Perea in an English translation of the Bible. The Greek word peran is translated “beyond” in passages such as Matthew 19:1 and Mark 10:1.

We visited mostly Old Testament sites, but there is considerable disagreement among scholars about the precise identification of most of these sites. Here are some possible sites we saw: Abel-Shittim, Succoth, Zarethan (or Zaphon). We also visited Tell Mazar, and the area of Tell Dhahab (possible sites of Penuel, and nearby Mahanaim). There are no road signs to these places and the locals in the nearby villages provided little help. This is the vicinity where Jacob settled for a while on his trek from Padan-Aram to Shechem.

One of our most interesting stops was at Tell Kafrein. This site had not yet been identified, but a team of archaeologists from a Greek university were working there. We met the director and received a good tour of the site and of the pottery lab.

Today we will probably go to the area south of Amman, including Heshbon, Dibon, and other sites.

I just had word from Elizabeth that the group arrived safely at JFK in New York.

David, Lowell, and I had a good day here in Jordan. We saw the following sites: Ramoth Gilead, Pella, Deir Alla (possibly Succoth), and some other places.

As time permits I will try to post a few more photos. The smoke is so bad in the hotel lobby that I can’t take much more of it.